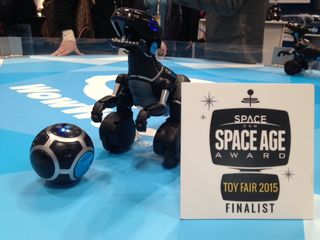 Thousands of adults gathered in New York City last week to marvel over an overwhelming display of the newest gadgets, gizmos, robots and other toys from around the world, on display at the 2015 Toy Fair.

Space.com staffers hit the floor at the 112th annual North American International Toy Fair to find entries for our Space Age Awards, which are given out to the best new space- and science-themed toys we find at the convention each year. If you want to see some of our favorite robots doing their thing at the convention, check out this Toy Fair video on Space.com.

We rounded up an impressive list of finalists and winners for the awards, but there were a lot of other great things that didn't fit within the award categories. [See photos from Toy Fair 2015]

Here are some of our favorite toys on the floor at Toy Fair:

What's better than a robot dinosaur that chases a ball, sits on command and basically acts like a pet dog?

A herd of those robot dinosaurs!

Meet the MiPosaur: the newest robot from the WowWee toy company. Watching seven of the MiPosaurs run around together was easily one of the highlights of this year's Toy Fair (as featured in the video linked above.)

I could have spent my entire two days at Toy Fair focused only on the plethora of board games presented there. Alas, I had other duties, but I did get to stop by the Mayfair games booth, where I heard about a new game coming out this year.

Mayfair games is the United States publisher of Settlers of Catan, one of the all-time best-selling games in Europe, and which is slowly becoming a hit in the U.S. This year, Mayfair is releasing a fourth edition of the game. Two years ago, the company put out a Star Trek version of Catan, and last year they published an expansion pack.

The Mayfair representative I talked to described the game as a "cooperative problem-solving dice game." The simple premise is that players work together to repair the damaged USS Enterprise before time runs out.

The big bonus about this game is that players can choose to play as character from either the original "Star Trek" series, or "Star Trek: The Next Generation."

Did you know it's possible to hold soap bubbles in the palm of your hand? Just put on knit gloves. Here's photographic proof: Space.com reporter Miriam Kramer holding bubbles at the Be Amazing! Toys booth.

You can actually hold bubbles when you're wearing gloves because they aren't covered in dirt and oil, like your hands. It's the dirt and oil on skin that pop the bubbles, not contact alone. The bubbles in Miriam's hand look white because they are filled with evaporated dry ice! When they pop, the white, foggy gas pours down to the floor, because it's heavier than air.

This was just one of the awesome science demonstrations going on at the Be Amazing! Toys booth. (For example, Space.com's Managing Editor Tariq Malik was thrilled by the Alka-Seltzer rockets.)

Be Amazing! Toys makes a range of at-home science kits for people of all ages, including two at-home rocket kits. They also produce the Sick! Science line of toys, which are created by professional science educator and demonstrator Steve Spangler. Spangler has an entire YouTube series about fun science experiments you can do at home.

The newest Sick! Science kit was a finalist in the Do It Yourself Science category in Space.com's Space Age Awards. We'll definitely make a habit of visiting this booth at Toy Fair each year.

We saw some amazingly high-tech robots at Toy Fair 2015, but one of my favorites was one of the simplest: the Pump 'n' Play inflatable R/C characters by Bladez Toyz.

The robotic part of the toy sits beneath an inflated plastic body — in the video above, the character is a yellow minion from the "Despicable Me" movies, but there's also an R2D2, and Yoda and Darth Vader are set to be released this year. [Cosmic Toy Story: Buzz Lightyear in Space (Photos)]

These bots are remote-controlled and they're meant for battle: get two or more of them and crash them into each other. They self-right after they fall over so you'll never have to get up off the couch while you play with them.

There's no other way to say it: Uncle Milton knocked it out of the park this year. The company won two Space Age Awards, and for good reason.

Uncle Milton makes science-based toys. Unfortunately, it's rather easy for these types of toys to be heavy on the learning and light on the fun. But Uncle Milton brings in the magic of science without diminishing the toy's playability (at least that's what I, a full-grown adult with no children, thinks).

There are some awesome new editions to Uncle Milton's line of Star Wars toys. Among them is a light saber that uses static electricity to help kids elevate things using "the Force." The winner of our High Tech category is the Force Trainer II: a holographic Jedi training game that the company says detects EEG brain waves to make it work. Players need to mentally focus in order to pass levels in the game. The trainer is app-based, so the company can release new game levels.

There's also an Ant-Man ant farm, a baby Groot (from the "Guardians of the Galaxy" movie) that grows real grass, and the winner of the Cosmic Space category: Super Moon in My Room. Super Moon is a realistic model of the moon that lights up to show different phases including full, new, half, crescent and eclipse. Super Moon is meant for bedroom walls; you can set it to any phase you want, or use the app that sets it to the current phase of the actual moon.