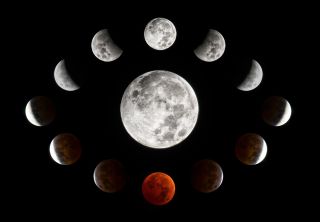 Monday marks Columbus Day for people in the United States, but did you know there was a lunar twist to the famous explorer's journey?

On Oct. 12, 1492, Columbus came ashore on an island northeast of Cuba, which he later named San Salvador (Holy Savior). Over the next 10 years Columbus would make three more voyages to the "New World." On his fourth and final voyage, while exploring the coast of Central America, Columbus found himself in dire straits.

He left Cádiz, Spain, on May 11, 1502, with the ships Capitana, Gallega, Vizcaína and Santiago de Palos.Unfortunately, thanks to an epidemic of shipworms eating holes in the planking of his fleet, Columbus was forced to abandon two of his ships and finally had to beach his last two caravels on the north coast of an island now known as Jamaica, on June 25, 1503. [See amazing images of the total lunar eclipse on Oct. 8, 2014]

Initially, the native peoples (Arawak Indians) welcomed the castaways, providing them with food and shelter, but as the days dragged into weeks, tensions mounted. Finally, after being stranded for more than six months, half of Columbus' crew mutinied, robbing and murdering some of the Arawaks, who themselves had grown weary of supplying cassava, corn and fish in exchange for little tin whistles, trinkets, hawk's bells and other trashy goods. With famine now threatening, Columbus formulated a desperate, albeit ingenious plan.

Almanac to the rescue

Coming to the admiral's rescue was Johannes Müller von Königsberg (1436-1476), known by his Latin pseudonym, Regiomontanus. He was a highly regarded German mathematician, astronomer and astrologer. Before his death, Regiomontanus published an almanac containing astronomical tables covering the years 1475-1506.

Regiomontanus'almanac turned out to be of great value, for his astronomical tables provided detailed information about the sun, moon and planets, as well as the more important stars and constellations to navigate by. After it was published, no sailor dared set out without a copy. With its help, explorers were able to leave their customary routes and venture out into the unknown seas in search of new frontiers.

Columbus, of course, had a copy of the almanac with him when he was stranded on Jamaica. And he soon discovered from studying its tables that on the evening of Thursday, Feb. 29, 1504, a total lunar eclipse would occur, beginning around the time of moonrise.

Armed with this knowledge, three days before the eclipse, Columbus requested a meeting with the Arawak chief and informed him that his Christian god was very angry with his people for no longer supplying him and his men with food. Therefore, he was about to provide a clear sign of his displeasure:  Three nights hence, he would all but obliterate the rising full moon, making it appear "inflamed with wrath," which would signify the evils that would soon be inflicted upon all of them.

On the appointed evening, as the sun set in the west and the moon started emerging from beyond the eastern horizon, it was plainly obvious to all that something was terribly wrong. By the time the moon appeared in full view, a small but noticeable dark scallop had been removed from its lower edge. [How lunar eclipses work (Infographic)]

And, just over an hour later, as evening twilight ended and full darkness descended, the moon indeed exhibited an eerily inflamed and "bloody" appearance: In place of the normally brilliant late winter full moon there now hung a dim red ball in the eastern sky.

According to Columbus' son, Ferdinand, the Arawaks were terrified at this sight and "with great howling and lamentation came running from every direction to the ships laden with provisions and beseeching the admiral to intercede with his god on their behalf." They promised that they would happily cooperate with Columbus and his men if only he would restore the moon back to its normal self. The great explorer told the natives that he would have to retire to confer privately with his god. He then shut himself in his cabin for about 50 minutes.

While in his quarters, Columbus turned an hourglass every half hour to time the various stages of the eclipse based on the calculations provided by Regiomontanus' almanac.

Just moments before the end of the total phase Columbus reappeared, announcing to the Arawaks that his god had pardoned them and would now allow the moon to gradually return. And at that moment, true to Columbus' word, the moon slowly began to reappear, and as it emerged from the Earth's shadow, the grateful Arawaks hurried away. They then kept Columbus and his men well supplied and well fed until a relief caravel from Hispaniola arrived on June 29, 1504. Columbus and his men returned to Spain on Nov. 7.

Another side to the story

In an interesting postscript to this story, in 1889, Mark Twain, likely influenced by The Eclipse Trick, wrote the novel, "A Connecticut Yankee in King Arthur's Court."In it, his main character, Hank Morgan, used a gambit similar to Columbus.

Morgan is about to be burned at the stake, so he "predicts" a solar eclipse he knows will occur, and in the process, claimed power over the sun. He gladly offers to return the sun to the sky in return for his freedom and a position as "perpetual minister and executive" to the king. The only problem with this story is that on the date that Mark Twain quoted — June 21, 528 — no such eclipse took place. In fact, the moon was three days past full.

Perhaps he should have consulted an almanac!