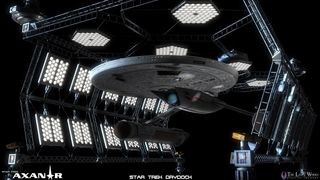 With the backing of none other than Sulu, a fan-made production of a feature-length "Star Trek" film raised more than $650,000 to chronicle one of the U.S.S. Enterprise's adventures.

"Battlestations! RT if you want exciting new Star Trek filmmaking. Let's make this happen--just hours left to help," George Takei, who starred in "Star Trek the Original Series," wrote in a tweet Saturday (Aug. 23). His efforts beamed about $200,000 to the funding campaign for "Star Trek: Axanar," according to an estimate by the filmmakers.

The newly crowdfunded feature-length film follows a mock documentary called "Prelude to Axanar", which was released a few weeks ago.

"The most important part was Prelude itself, because it gave us enormous credibility," team leader Alec Peters said in a statement. "Combine that with an amazingly-loyal and passionate group of donors from our first Kickstarter, who tirelessly evangelized for us, and the aid of the geek media, which got behind the project after seeing our first trailer, and there was no stopping the momentum we'd built up."

Actors in the new production include Richard Hatch (of "Battlestar: Galactica"), Gary Graham (of "Star Trek: Enterprise"), while production staff includes people such as Frank Serafine (who did sound design for "The Hunt For Red October") Tobias Richter, a visual effects artist who assisted with the remastered "Star Trek: The Next Generation" Blu-rays.

Actors are working at reduced ratesto make the cheaper production possible, which is possible because independent films are treated differently in union contracts. The timing of release has not been firmed up yet, but filming is expected to occur in December.

You can learn more about "Star Trek: The Battle of Axanar" through the fan film's Kickstarter website: https://www.kickstarter.com/projects/194429923/star-trek-axanar.