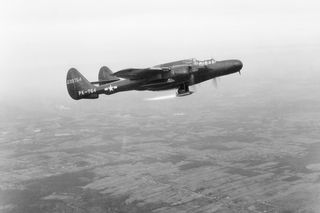 In this historical photo from the U.S. space agency, the P-61 airplane pictured in flight test with ramjet burning. The P-61 aircraft was built by Nothrup and used by the Aircraft Engine Research Laboratory or AERL of the NACA to test the new jet engine.