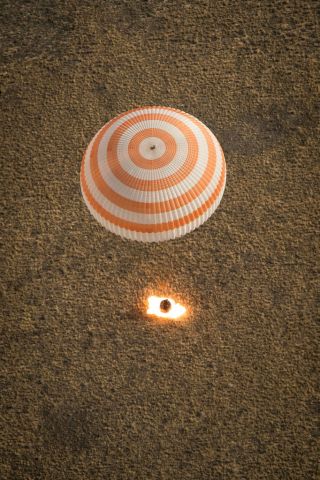 An apparent sensor glitch during the return to Earth of a Russian Soyuz space capsule with two cosmonauts and an American astronaut aboard may have sparked some concern among the crew, but never posed a danger to the space travelers, according to a NASA spokesman.

The glitch popped up during the Soyuz's descent, with Vinogradov telling Russian news agencies that he and his crewmates could not get updates on their altitude as the fell back to Earth. [See Soyuz Space Capsule Landing Photos]

"There were problems. For some reason after the undocking all our parameters disappeared. Essentially, after the undocking, we flew blind," Vinogradov told Russian news agencies according to the Agence France-Presse wire service.

The malfunction appears to have been a sensor issue that prevented the spaceflyers from being able to see their distance from the ground during their trip back to the Earth's surface, NASA spokesman Rob Navias said.

"The bottom line is the crew was in no danger," Navias told SPACE.com.

Astronauts flying onboard a Soyuz have very limited means of affecting the flight of the spaceship, Navias said. Soyuz space capsules are three-person vehicles consisting of a central crew capsule flanked by an orbital module and a propulsion module. The crew launches and returns to Earth in the crew capsule while the orbital and propulsion modules are discarded during descent.

"What I can tell you is that the crew doesn't fly the Soyuz," Navias said. "They're passive. This thing about flying blind has to do with their situational awareness of altimeter data based on what appears to have been a sensor issue that prevented them from seeing data onboard."

Because the astronauts were unable to follow their altitude from readings in the cockpit, recovery crews on the ground kept them updated with information being relayed to them from Russian Mission Control.

"The bottom line is, the Soyuz performed as it was expected to," Navias said. "There were no issues with the vehicle performance, it was just the crew's insight into altimeter data that they can't do anything about anyway… It really was a minor issue."

The Soyuz TMA-08M space capsule carrying Cassidy, Vinogradov and Misurkin touched down on the steppes of Kazakhstan in Central Asia late Tuesday night. The three spaceflyers spent 166 days in space after launching to the space station on March 28 in a history-making one-day "express" flight to the orbiting outpost.

It was Misurkin's first spaceflight and Cassidy's second. Cassidy has clocked a total of 181 days in space while Vinogradov has 546 days under his belt over the course of three spaceflights.

The three astronauts made up half of the station's Expedition 35 and 36 crews. NASA's Karen Nyberg, European Space Agency astronaut Luca Parmitano and cosmonaut Fyodor Yurchikhin are still living and working aboard the space station.