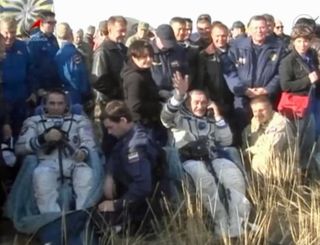 A Russian Soyuz spacecraft has returned an American astronauts and two cosmonauts safely back to Earth, capping a five-month trek to the International Space Station.

The Soyuz TMA-08M space capsule carrying NASA astronaut Chris Cassidy and Russian cosmonauts Pavel Vinogradov and Alexander Misurkin touched down  at 10:58 p.m. EDT  Tuesday (0258 Sept. 11), though it was early Wednesday morning at their landing site on the steppes Kazakhstan in Central Asia.

But it seemed clear even before the landing that the returning space travelers were looking forward to their return home.

"Okay, I'm thinking about coffee and apples," one of the Russian crewmates said as the Soyuz streaked back to Earth.

And the cosmonauts weren't the only ones eager to taste the culinary delights of Earth once more.

Before leaving the space station, Cassidy told reporters he would be sad to leave the orbiting lab behind, but at the same time he was excited to return home and see his wife and three children again.

In addition to rejoining his family, a "a gooey, fresh-baked chocolate chip cookie ranks right on the top of my list," Cassidy told CBS Radio in an interview broadcast on NASA TV.

Cassidy, Vinogradov and Misurkin launched to the International Space Station on March 28 and made history when they became the first crew ever to launch on an "express" one-day flight to the orbiting lab. Their successful flight set the bar for future Soyuz crew launches to the space station.

After landing, Cassidy, Vinogradov and Misurkin will undergo a battery of medical tests to check their health after the long-duration spaceflight. Cassidy will also participate in extra tests to serve as a baseline for his fellow NASA astronaut Scott Kelly, who is slated to launch on a one-year space station mission — twice as long as typical station stays — in 2015, NASA officials said. The test will also inform work on potential manned missions to Mars, they added.

With the safe return of the Soyuz crew, the Expedition 37 mission has officially begun on the space station. The crew includes Russian cosmonaut Fyodor Yurchikhin, NASA astronaut Karen Nyberg and Italian astronaut Luca Parmitano, with Yurchikhin commanding the team.

Nyberg snapped photos of her Earth-bound comrades as they left the space station. She even posted one image on Twitter, where she has been chronicling her spaceflight under the name @AstroKarenN.

Yurchikin, Nyberg and Parmitano arrived at the space station in May. They will be joined three new crewmates — Russian cosmonauts Oleg Kotov and Sergey Ryazanskiy and NASA astronaut Michael Hopkins — once that new crew launches on Sept. 25. The station crew is also preparing for the arrival later this month of the first unmanned cargo ship built by the commercial spaceflight company Orbital Sciences Corp., of Dulles, Va. The mission is slated to launch from NASA's Wallops Flight Facility on Wallops Island, Va., on Sept. 17.

The $100 billion International Space Station has been continuously manned by astronauts and cosmonauts since 2000. Construction of the orbiting laboratory began in 1998, with five different space agencies and 15 countries overseeing its assembly. It is the largest manmade structure in space.