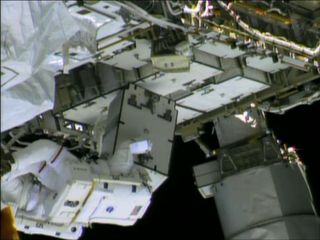 NASA astronaut Chris Cassidy (striped spacesuit) holds an ammonia pump control box during a spacewalk to hunt for an ammonia leak outside the International Space Station on May 13, 2013. The spacesuit of astronaut Tom Marshburn can be seen behind him.
(Image: © NASA TV)

Two spacewalking astronauts are hunting for an ammonia leak outside the International Space Station today (May 11) in the hopes of bringing the outpost's vital cooling system back up to full strength.

Clad in bulky spacesuits, NASA astronauts Chris Cassidy and Tom Marshburn floated outside the space station at 8:44 a.m. EDT (1244 GMT), beginning what officials have described as a six-hour detective's investigation in orbit to find - and hopefully fix - the ammonia coolant leak. The space station uses liquid ammonia as a vital coolant to keep its systems cool. You can watch the spacewalk live here on SPACE.com via NASA TV.

Cassidy, who is leading today's spacewalk, reported seeing "no smoking gun" as he and Marshburn began their inspection of an ammonia pump control box suspected to be the source of the leak. Later, they removed the box and repoted no signs of flakes of ammonia ice. Cassidy said he did see a brown spot that "looks like a coffee stain" on some equipment, but it is unclear if it is related. Mission Control asked for photos of the spot. [Emergency Spacewalk to Fix Space Station Leak in Photos]

The ammonia leak was first spotted by space station astronauts on Thursday (May 9), when the crew reported seeing flakes of frozen coolant floating outside. They recorded video of the ammonia leak and sent it down to Mission Control for analysis, leading to today's emergency spacewalk to search for the leak. It is the fastest spacewalk plan of its kind ever devised for a space station crew, mission managers have said.

The primary goal of today's spacewalk is to inspect the suspect ammonia pump control box for any signs of damage or leaks. The box is one of several on the space station's far left segment, known as the Port 6 truss. It is part of the cooling system for the two wing-like solar arrays extending from the Port 6 segment.

While the leak poses no danger to the space station's crew, if it goes unchecked it could impact the amount of power available for daily operations on the orbiting laboratory, mission managers have said.

If Cassidy and Marshburn find definite evidence of the ammonia leak in the pump box, they can replace the box with a spare stored on the truss segment. If no leak is found, they will re-install the original pump control box and return inside the space station, NASA officials have said.

So far, however, the spacewalkers have found no obvious signs of ammonia leaking from the pump control box.

"I can't think of anything to tell you other than nominal," Cassidy said as he described what he was seeing at the pump control box's location.

The two astronauts will also take extra care of their spacesuits while working near the ammonia pump control box. They have brushes and other tools to clean the spacesuits of any toxic ammonia flakes that may stick to them, and can perform a "bake out" to allow any ammonia to evaporate in sunlight, if needed.

This is not the first time astronauts have had to tackle ammonia leaks in the space station's cooling system during a spacewalk.

Last year, astronauts Sunita Williams of NASA and Akihiko Hoshide of Japan performed a spacewalk to fix a leak that was also found on the Port 6 truss. That ammonia leak was in the same coolant loop as the current leak, but engineers do not yet know if the two leaks are related.

The station's Port 6 truss is the oldest piece of the space station's scaffolding-like backbone and carries two of the outpost's eight wing-like solar arrays. It launched in November 2000 and was originally installed on the station's roof, towering over the orbiting lap. In 2007, visiting shuttle astronauts relocated the P6 truss to its final location on the station's far left side.

The three men are due to leave the space station on Monday (May 13) and land on the steppes of Kazakhstan in Central Asia. Those plans are still going forward, space station mission managers said.