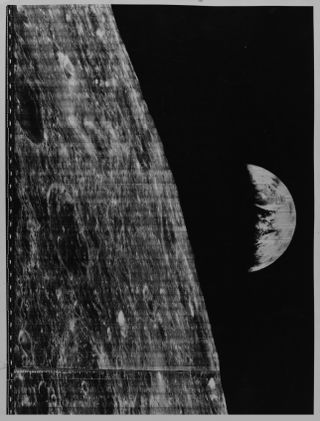 The unmanned Lunar Orbiter missions in 1966 and 1967 prepared the ground for Apollo by mapping the surface of the moon from space. One byproduct of this is a remarkable series of photos, such as this image, from Lunar Orbiter I, which are the first pictures of the Earth taken from beyond the moon.
(Image: © UCL Faculty of Mathematical and Physical Sciences )

An early lunar probe's first glimpse of Earth and Soviet snapshots of the surface of Venus are among a treasure trove of historic Space Age images newly brought to life online.

University College London recently pulled the series of hard-copy photos from their historic archive of space images. Many of the pictures arrived at UCL in the early days of space exploration, before NASA and other agencies used the Internet to share their data.

For some of the pictures, UCL's digital release marks the first time they are publicly available over the Internet, such as a detailed map of the moon made by an amateur British astronomer in the early 20th century. [See more photos from the Historic Space Archive]

The moon map was created by Walter Goodacre, who was president of the Lunar section of the British Astronomical Association. It was broken up into sections to be published in book form in 1910. UCL researchers stitched the plates back together into a single map of the moon, which is amazingly detailed considering it dates back to a time when observations were conducted without today's powerful telescopes.

The archive also holds images from NASA's Voyager spacecraft, which provided the first detailed pictures of objects in the outer solar system, including the moons of Jupiter. The images these missions beamed back to Earth in the late 1970s had to be stitched together by hand. Working mosaics of the moons Io and Ganymede full of handwritten notes are now online.

Before NASA astronaut William Anders took the iconic Earthrise photo during the Apollo 8 mission, an unmanned lunar probe snapped a black-and-white series looking back at our planet from the moon. The Lunar Orbiter missions of 1966 and 1967 mapped the surface of the moon from space to aid preparations for the Apollo missions. UCL has copies of the pictures from Lunar Orbiter I, the first photos of our planet captured from beyond the moon.

UCL's collection additionally includes Soviet images of Venus, showing the planet's rocky surface of Venus. The Venus surface is shrouded in dense clouds making it difficult for scientists to take direct photos of the hot planet without using radar. NASA never sent a probe to land on Venus, but the Soviets did through the Venera program.

The photos were published as part of the Festival of the Planets, a series of public events being held throughout London in conjunction with the European Planetary Science Congress 2013, which runs from Sept. 8 to 13.

You can see the full archive of historic space images at UCL here: http://www.ucl.ac.uk/maps-faculty/space-history