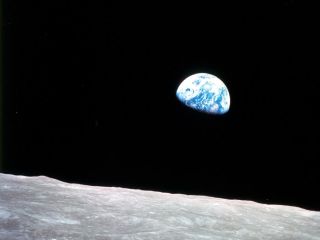 A new NASA video draws on detailed maps of the moon's surface made recently to recreate the view of "Earthrise" seen by the astronauts of the Apollo 8 mission.

On Dec. 24, 1968, astronauts Frank Borman, William Anders, and James Lovell orbited the moon and caught the first sight of our planet from a distance. The famous Christmas-eve view became known as "Earthrise," and changed the way Earthlings viewed our home world from then on.

Now, NASA scientists have used footage from the Lunar Reconnaissance Orbiter currently circling the moon to recreate the vision for the rest of us in honor of Earth Day 2012, which occurred Sunday (April 22).

"This visualization recreates for everyone the wondrous experience of seeing Earth from that privileged viewpoint," LRO project scientist Rich Vondrak of NASA's Goddard Space Flight Center in Greenbelt, Md., said in a statement. You can see the new Earthrise video here.

The scientists used software to recreate the orbit charted by the Apollo 8 capsule based on coordinates from the mission report and photographs taken by the crew.

The moon surface footage comes from the high-definition maps being created by LRO, while the Earth imagery is a mosaic of pictures taken by the Moderate Resolution Imaging Spectroradiometer (known as MODIS) instrument on the Terra satellite. These photos were assembled by NASA's Visible Earth team.

The original Earthrise sighting was not planned, but occurred serendipitously.

"The spacecraft was pointed down to look at the moon's surface, because Anders was conducting an extensive photographic survey," said James Rice, an astrogeologist at Goddard. "But Lovell needed to perform a navigation sighting, so Borman rolled the spacecraft."

Once the image of Earth popped into view, the astronauts can be heard in the mission audio recordings interrupting their work to cry out, "Oh my God! Look at that picture over there!"

These audio recordings accompany the visual track of the new NASA video, giving the viewer another taste of what it might have felt like to be there at that pivotal moment.