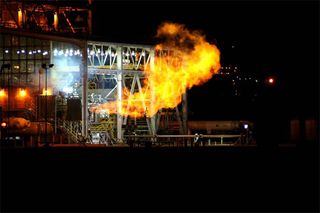 An image of the Integrated Powerhead Demonstrator during a sucessful test on April 28 at NASA's Stennis Space Center.
(Image: © NASA)

A program testing a next-generation liquid-fuel engine being jointly developed by NASA, the U.S. Air Force and two prime aerospace contractors is scheduled to resume testing after being temporarily suspended due to Hurricanes Katrina and Rita.

The engine, known as the Integrated Powerhead Demonstrator (IPD), was being tested at NASA's Stennis Space Center near Bay St. Louis, Mississippi. The program was suspended after the hurricanes caused heavy damage to the center and left many workers homeless.

Stephen Hannah, the IPD Program Manager for the Air Force Research Laboratory (AFRL), said that testing for the engine will begin again shortly.

"The program is out of hibernation and we're waiting on personnel to return," Hannah said. "We expect to be testing before the holidays, maybe even before the end of the month."

The IPD is designed to provide nearly twice as much thrust as current space shuttle engines and to do it safer and more efficiently. It does this by using unique "full flow" preburners that provide more thrust than traditional rocket engines while operating at cooler temperatures.

In current space shuttle engines, a liquid hydrogen fuel and a liquid oxygen oxidizer are both fed into a combustion chamber and ignited. The reaction produces a hot high-pressure gas that is pushed through a nozzle to create thrust.

Both liquid fuel and oxidizer must be fed into the combustion chamber very rapidly. In the case of the space shuttle's main engine, an entire swimming pool's worth of fuel is used up in only 25 seconds.

To move that much fuel that quickly, a turbopump with high-speed turbines is used. In a traditional liquid-fuel rocket engine, a small amount of the fuel is "preburned," just enough to power up the turbopump so it can begin siphoning off the rest of the fuel into the combustion chamber. A similar process occurs with the oxidizer.

The IPD works differently. Instead of only send small amounts of fuel and oxidizer to the preburners, the IPD engine sends all of the fuel and all of the oxidizer. This causes the turbopump's turbines to spin more quickly, producing more thrust. It's like a pinwheel spinning faster as more wind is blown through its blades.

A major advantage of this type of full flow engine is that it run cooler than traditional engines, which can reach temperatures of more than 3,000 degrees Fahrenheit. The IPD engine, in contrasts, runs several hundred degrees cooler, said Gary Genge, the IPD Deputy Project Manager.

Reducing operating temperatures could drastically extend the life of the rocket engines. Current shuttle main engine require maintenance and refurbishing after about 10 flights. IPD engines are intended to fly 100 times or more between maintenance periods, and engineers hope to be able to boost that number to 200.

In addition to the full flow preburners, the IPD engine also sports hydrostatic bearings rather than traditional ball bearings in support of the turbo pump's rotors. The hydrostatic bearings will float on a layer of liquid during operation, thereby reducing their overall wear and extending their usefulness.

When completed, the IPD will be capable of generating 250,000-pounds of thrust--double the performance of the most advanced booster engines currently available. During its last test on August 17, the IPD engine reached 90 percent of this target, according to Hannah.

The US Air Force and NASA are working with aerospace contractors Rocketdyne and Aerojet to develop the IDP engine.