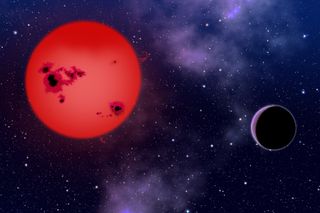 Habitable planets might have too short a window for life to develop before gravitational interactions with a close, red star destroy obliquity, and therefore seasons.
(Image: © David A. Aguilar, CfA)

Although winter now grips the Northern Hemisphere, those who dislike the cold weather can rest assured that warmer months shall return. This familiar pattern of spring, summer, fall and winter does more than merely provide variety, however. The fact that life can exist at all on Earth is closely tied to seasonality, which is a sign of global temperature moderation.

The driver of our seasons is the slight "lean" Earth has in its rotational axis as it revolves around the sun, known as axial tilt or obliquity. According to René Heller, a postdoctoral research associate at the Leibniz Institute for Astrophysics in Potsdam, Germany, astrobiologists have not yet paid much attention to this variable in gauging the possibility for alien life to exist on distant planets.

"Obliquity and seasonal aspects are an important issue in understanding exoplanet habitability that has mostly been neglected so far," Heller said.

To address this gap, Heller and his colleagues published two papers recently looking at how the gravitational interactions of stars and planets eventually erode a planet's axial tilt. The findings do not bode well for planets residing in the habitable, or "Goldilocks," zones around red dwarf stars smaller than the sun. These zones are the just-right temperature bands wherein water can remain liquid on the surface of a planet. [The Strangest Alien Planets]

According to computer simulations, red dwarfs quickly erase the axial tilt of habitable, Earth-like exoplanets. This temperature-moderating tilt is nullified in such a short time that life may never have a chance to get going. An exoplanet that fits this barren scenario is Gliese 581d, usually considered one of the best candidates for life, researchers said.

On the other hand, terrestrial planets around sun-like stars fare much better. These worlds should not see their axial tilts erode to dangerously low levels until many billions of years down the road, well after life has had a chance to arise and possibly evolve into technological civilizations. A planetary abode representing this scenario is Kepler 22-b, the first near-Earth-sized world discovered in a habitable zone by NASA's planet-hunting Kepler space telescope.

A tale of the seasons

To envision obliquity, think of the tilt on a spinning desktop globe. Obliquity is measured as the angle that a planet's poles are offset from being perpendicular to the plane of the planet's orbit around a star.

Earth's obliquity is presently about 23.5 degrees, although how it might have changed over geological time is a matter of debate. Planets get their obliquity from a number of factors, including impacts from objects early in a solar system's history, stars passing by and the gravitational influences of other planets.

Seasons arise from this tilt as follows: When a planet revolves around a star and spins on its axis, obliquity causes the intensity of sunlight reaching portions of the planet to cyclically vary. For instance, during the several months of the Northern Hemisphere's winter on Earth, the northern half of the planet is tilted away from the sun. Rays of light strike the ground there at an angle and must travel through more atmosphere, thus diminishing the amount of delivered energy. The daily period of solar illumination is also shorter.

Meanwhile, the Southern Hemisphere soaks up the long, warm days of summer before autumn's nippiness creeps back.

Overall, Earth's obliquity coupled with daily axial rotations bathe the world in a smooth distribution of temperatures. The peak highs and lows do not exceed about 200 degrees Fahrenheit (111 degrees Celsius) in variance.

From pleasant to apocalyptic?

But take away the Earth's axial slant, and the place might become a lot less inviting.

With an obliquity of less than five degrees or so, an Earth-like planet's broader equatorial regions bear the full bruntof its star's radiance. The polar regions also receive far less sunlight than they do with seasonal ebbs and flows. The result: extreme temperature gradients based on latitude.

"Your equator is heated enormously while the poles freeze," Heller said.

In theory, bands of habitability in temperate, mid-latitude zones could persist. In a worst-case scenario, however, the entire atmosphere of a zero-obliquity planet could collapse, Heller said. Gases might evaporate into space around the planet's blazing middle and freeze to the ground in the bleak north and south.

Life, had it ever emerged, might be stopped dead in its tracks. [5 Bold Claims of Alien Life]

Such a fate could have befallen Gliese 581d, according to calculations by Heller and his colleagues.

They modeled how the gravitational dance between a star and a planet grinds away at any obliquity the planet might possess. This process, dubbed "tilt erosion," happens because a star's gravity pulls more on the side of the planet nearest it. That attraction deforms the planet into a slightly non-spherical shape, with tidal bulges pointed toward and away from the sun.

On Earth, we experience a similar effect, where the nearby moon's gravity gives the Earth's oceans their tides. The misalignment between the two bodies' centers of gravity imparts a torque to the planet.

"This torque tends to align the tidal bulge with the two centers of mass," Heller explained. Over time, this mechanism forces the planet into a zero-obliquity equilibrium.

The length of a window of significant obliquity could be critical for the development of life. On Earth, it took in the ballpark of a billion years for bacteria to emerge; it was another 3.5 billion years or so before complex, sentient animals — human beings — started drawing on cave walls.

For relatively cool, dim stars with less than half the sun's mass, the obliquity window becomes quite narrow. That is because exoplanets must reside in tight, Mercury-like or closer orbits around red dwarfs in order to collect enough heat and sunlight to power biological beings. At these short distances, a star exerts strong tidal effects, Heller said.

Lifeless under a red sun

"We found that extrasolar terrestrial planets in the habitable zone of low-mass stars lose their primordial obliquities on time scales much shorter than life required to evolve on Earth," Heller said. [Gallery: A World of Kepler Planets]

The obliquities for "super-Earths" — worlds several to 10 times the mass of our home planet —  would also rapidly vanish around red dwarfs. The super-Earth Gliese 581d orbits a red star with just 31 percent of the sun's mass, and the system is reckoned to be perhaps twice the sun's age at about 9 billion years. As a result, Gliese 581d should have lost its axial tilt long ago.

To make matters worse for any beleaguered life forms, in the tilt erosion process a planet's spinning on its axis slows as well. Given enough time, besides losing its seasons, a world becomes "tidally locked" — that is, the same side of the planet constantly faces its sun. That side can become superheated and sterilized while the dark half of the planet enters a permanent, frozen night.

Yet for habitable planets around sun-like stars, obliquity loss caused by tidal interactions with the star should not be a show-stopper. Compared to red dwarfs, the habitable zone is anywhere from two to three times farther out from a warmer, brighter star like our own, and at that distance tidal forces are much weaker, Heller said.

That means Kepler-22b, among the most Earth-like exoplanets yet found, might bask in its own version of the four classic seasons. "Our results suggest that this planet would still have its initial obliquity, and therefore could experience seasons," Heller said.

The example of our own planet would seem to bear this likelihood out, of course. But the picture is indeed a lot more complicated, Heller pointed out.

Quite a few astronomical phenomena can alter the rotation of a planet on its axis, including the presence of a moonand the gravitational influences of other planets. In our solar system, the biggest bully on the block is Jupiter, whose gravity can disturb planets' axial tilts. Studies have suggested that our relatively large moon has balanced Earth against this force, thereby limiting axial wobbling and preserving the planet's obliquity over long periods of time.

For an opposite case, consider Mars. Hulking Jupiter wreaks havoc with the Red Planet's obliquity, causing it to vary by perhaps as much as 60 degrees over the course of a million years, Heller said. Those disturbances lead to big swings in global temperatures and glacier cover, and on more habitable worlds that sort of climatic chaos could spell the end for life. [7 Biggest Mysteries of Mars]

Yet big moons might not be a saving grace for habitable-zone, terrestrial worlds around red dwarfs. The habitable planet's necessary close proximity to a dim star could destabilize lunar orbits, said Caleb Scharf, director of Columbia University's multidisciplinary Astrobiology Center, who was not involved in Heller's research.

Getting a bead on tilt

Calculating the long-term gravitational interplay between astronomical bodies is a demanding process, even for fast computers. Therefore, Heller and his colleagues have limited their analysis to planets and stars, though three- and four-body simulations are in the works.

For now, knowing the true states of both Gliese 581d and Kepler-22b will have to wait. Gauging an exoplanet's obliquity, especially a terrestrial-sized world's, remains a tricky feat given today's instrument technology.

"The obliquity of exoplanets is essentially an unknown at this time," Scharf said.

"Obliquity is definitely a very important variable," Scharf said. Depending upon a range of other habitability factors, he added, "obliquity can certainly end up being the critical linchpin of determining whether or not any part of a planet could be considered habitable."

This story was provided by Astrobiology Magazine, a web-based publication sponsored by the NASA astrobiology program. Follow SPACE.com for the latest in space science and exploration news on Twitter @Spacedotcom and on Facebook.