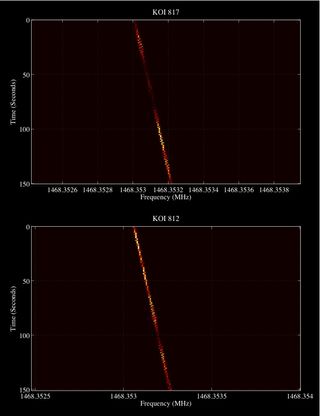 An example signal found by scientists working on the search for extraterrestrial intelligence (SETI), targeted at planets found by NASA's Kepler telescope. These are plots of electromagnetic energy as a function of frequency and time. Brighter colors represent more radio energy at a particular time and frequency.
(Image: © Kepler/SETI/UC-Berkeley)

Until recently, astronomers searching for signals from intelligent aliens have had to scan the heavens blindly. But now that's starting to change, as scientists are targeting newly discovered exoplanets beyond the solar system for their search.

Since the first alien planet was discovered in 1996, astronomers have found more than 700 worlds around other stars.

A leading player in this search is NASA's Kepler Space Telescope, which has discovered 2,326 exoplanet candidates since its launch in March 2009. Follow-up observations from the ground over the coming years hope to confirm most of these as the genuine article.

Now scientists involved in the search for extraterrestrial intelligence (SETI) have analyzed their first data from radio telescope observations of Kepler planets. The researchers are searching for radio signals that aren't likely to be caused by natural phenomena, and thus could represent an extraterrestrial message.

Such signals are likely to be narrow in frequency, as known astrophysical phenomena such as black holes and exploding stars tend to release radio waves across a wider range of frequencies.

These signals will also probably show a gradual drift in frequency over time, which would be expected because of the Doppler effect caused by the relative motion between the planet broadcasting a signal and us here on Earth. [Gallery: A World of Kepler Planets]

So far, the scientists have already found a few signals that fit the bill — but don't get too excited just yet.

"[O]ur analyses have generated a few 'hits,' but all are undoubtedly examples of terrestrial radio frequency interference" caused by radio signals broadcast here on Earth, the researchers wrote in a statement. The study is being led by the University of California, Berkeley, and involves scientists from the SETI Institute in Mountain View, Calif., and the National Radio Astronomy Observatory in Charlottesville, Va.

The researchers can tell these signals were probably produced locally because they see the same pattern from two different alien planets.

"If we see a signal coming from multiple positions on the sky, like the ones below, it is very likely to be interference," the researchers wrote.

Though the researchers haven't heard from extraterrestrials just yet, there's lots more data to come.

"Even though these signals are interference, detecting events with similar characteristics to what we expect from ET is a good indication that the first steps of our detection algorithms are working properly," the scientists wrote.