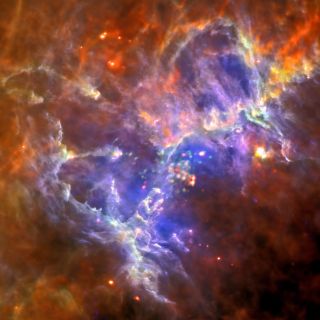 Combining almost opposite ends of the electromagnetic spectrum, this composite of the Herschel in far-infrared and XMM-Newton's X-ray images shows how the hot young stars detected by the X-ray observations are sculpting and interacting with the surrounding ultra-cool gas and dust, which, at only a few degrees above absolute zero, is the critical material for star formation itself. Both wavelengths would be blocked by Earth's atmosphere, so are critical to our understanding of the lifecycle of stars.
(Image: © far-infrared: ESA/Herschel/PACS/SPIRE/Hill, Motte, HOBYS Key Programme Consortium; X-ray: ESA/XMM-Newton/EPIC/XMM-Newton-SOC/Boulanger )

A pair of European space telescopes has snapped a stunning new view of one of the most iconic deep-space objects ever seen: the Eagle nebula.

The Eagle nebula is a distant star-forming nest of gas and dust about 6,500 light-years from Earth in the constellation Serpens. The nebula gained notoriety in 1995, when NASA's Hubble Space Telescope revealed vast pillar-like structures  — the so-called "Pillars of Creation" — in a picture that remains one of the most iconic space photos ever recorded.

The combined observations of the two spacecraft, as well as infrared views from telescopes on Earth, reveal the Eagle nebula as a colorful swirl of gas and dust with a dense core of stars, which appear in shades of red, green, blue, yellow and orange. The stars belong to the star cluster NGC6611. [See new photos and video of the Eagle nebula]

For astronomers, the new views of the Eagle nebula are a must-see in order to observe small clumps of material known as "evaporating gaseous globules," or EGGs, in the nebula's pillars. Astronomers have long-suspected that stars were being born inside some of the Eagle nebula EGGs, but the Hubble Space Telescope was unable to peer inside them using its visible light camera, ESA officials said.

Since the Eagle nebula is 6,500 light-years away, its light takes about 6,500 years to reach Earth and telescopes today reveal the nebula as it existed in the distant past. The supernova event and destruction of the pillars won't be visible for at least another few hundred years, ESA officials said.