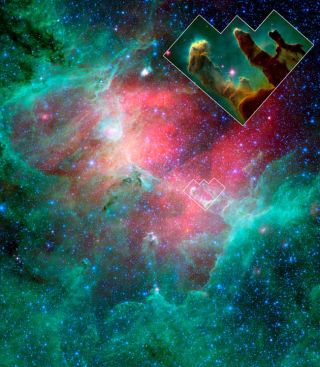 The Spitzer Space Telescope's new view of the Eagle Nebula with a pullout of the Pillars of Creation region.
(Image: © NASA/JPL-Caltech/N. Flagey/MIPSGAL Science Team.)

SEATTLE - They helped open the public's eyes to the wonders of space when they were first photographed in 1995, but a new study suggests the famous Pillars of Creation in the Eagle Nebula might have already been toppled long ago, and that what the Hubble Space Telescope actually captured was only a ghost image.

A new picture of the Eagle Nebula shot by NASA's Spitzer Space Telescope, presented here at the 209th meeting of the American Astronomical Society, show the intact pillars next to a giant cloud of glowing dust scorched by the heat of a massive stellar explosion known as a supernova [image].

"The pillars have already been destroyed by the shockwave," said study leader Nicolas Flagey of The Institut d'Astrophysique Spatiale in France.

Astronomers think the supernova's shock wave knocked the pillars down about 6,000 years ago. But because the Eagle Nebula is located some 7,000 light years away, the majestic pillars will appear intact to observers on Earth for another 1,000 years or so.

The supernova blast is thought to have occurred between 6,000 and 9,000 years ago, so what astronomers see now is evidence of the blast just before its destructive shock wave reached the pillars.

Astronomers have long predicted that a supernova blast wave would destroy the famous pillars. One earlier study concluded that the pillars would be destroyed sometime within the next million years. About 20 stars in the region are ripe for exploding and it was only a matter of time before one detonated.

The new Spitzer image suggests one of the stellar time bombs in the Eagle Nebula has already gone off. Humans living 1,000 to 2,000 years ago might have noticed the supernova event that destroyed the pillars as an unusually bright star in the sky.

"We have checked with historical records, and there might be some candidates," in Chinese history, Flagey said. It's also possible that the supernova was hidden behind huge amounts of interstellar dust that muffled the explosion, he added.

In an end befitting their name, astronomers think that gas and dust from the pillar's destruction will help give birth to a new generation of stars.