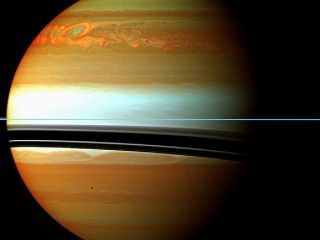 These red, orange and green clouds (false color) in Saturn's northern hemisphere indicate the tail end of a massive storm that started in December 2010. Even after visible signs of the storm started to fade, infrared measurements continued to reveal powerful effects at work in Saturn's stratosphere.
(Image: © NASA/JPL-Caltech/Space Science Institute)

They Came From Space!

The year 2011 was a huge one for space photography, with NASA's historic final space shuttle missions and dazzling views of the sun, auroras and the cosmos.

It wasn't easy, but we pulled 50 of the most amazing views from space in 2011 for you to review. But which one is the best? Vote now and decide!

Shuttle Launch From Above

The breathtaking final launch of the space shuttle Atlantis on July 8 was captured in an incredible photo snapped from an airborne training aircraft NASA uses to teach astronauts how to fly the winged spaceship. [Read More]

NEXT: World's Most Complex Radio Telescope Snaps Stunning 1st Photo of the Cosmos

After years of planning, construction and assembly, a gigantic observatory billed as the world's most complex array of ground-based telescopes has opened its eyes in South America and captured its first image. The ALMA telescope in Chile is up and running. [Full Story]

When a U.S. Air Force rocket blasted off from NASA's Wallops Flight Facility on Wallops Island, Va., it lit up the late-night sky with a spectacular 11:09 p.m. EDT liftoff.

A dazzling new photo from astronauts in orbit show NASA's space shuttle Atlantis zooming above Earth with the eerie green glow of the Southern Lights in the distance.[Read More]

A member of the Expedition 28 crew aboard the International Space Station caught this spectacular photo of a lifetime, showing space shuttle Atlantis actually hurtling through the Earth's atmosphere on its way back to Kennedy Space Center, Florida, July 21, 2011. [Photos of Atlantis in Orbit]

NEXT: Dazzling View of Shuttle From Australia

In a Land Down Under, Where Spacecraft Glow

Scientist John Sarkissian captured this never-to-be-seen-again image of space shuttle Atlantis and the International Space Station streaking through the Australian sky with the Parkes 64 meter radio telescope in the foreground. Atlantis's trail moves right to left behind the radio telescope, while the space station follows arcing from the lower right corner of the frame, about two minutes behind Atlantis in low Earth orbit. The Parkes 64 meter radio telescope has a long connection to human spaceflight, having supplied television images from the moon to Earth during Apollo 11. Also visible in the night sky of New South Wales, Australia, are southerly constellations Vela, Puppis, and Hydra. Atlantis made its final landing on July 21, 2011, at NASA's Kennedy Space Center. This image was released to SPACE.com on July 26. [See Daily Space Photos]

NEXT: Juno Launch as Seen by Astronaut

NEXT: Infrared Photos of Neptune & Uranus

The amazing images actually started flowing on Aug. 13, when space station astronaut Ron Garan captured a stunning image of a "shooting star" during the Perseid meteor shower from his window seat 220 miles above Earth. [Full Story]