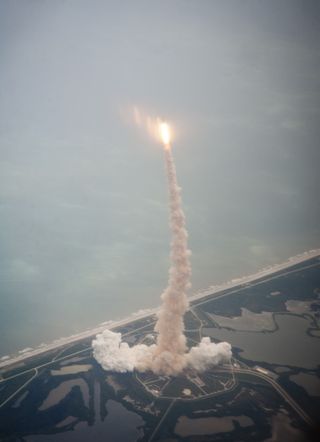 The space shuttle Atlantis' last launch on July 8, 2011 is seen from above through the window of a Shuttle Training Aircraft.
(Image: © NASA Kennedy (via Twitter))

The breathtaking final launch of the space shuttle Atlantis was captured in incredible photos snapped from an airborne training aircraft NASA uses to teach astronauts how to fly the winged spaceship.

Atlantis blasted off from Kennedy Space Center in Cape Canaveral, Fla. today (July 8) at 11:29 a.m. EDT (1529 GMT). The launch of Atlantis on its STS-135 mission lit up the late morning sky despite early concerns over bad weather. The flight is the final voyage of NASA's space shuttle program. [See the aerial photos of Atlantis' last launch]

In the aerial views, Atlantis and its impressive exhaust plume were captured through the window of the agency's Shuttle Training Aircraft. These modified Gulfstream jets are used by astronauts to practice landing the space shuttle. The aircraft's controls are modified to simulate the orbiter's handling on the sharply angled descent that it makes on approach.

From the ground, Atlantis launched into the sky, then punched through a layer of clouds less than a minute after liftoff, all but disappearing from view. Only the shadow of the shuttle's plume that rose above the cloud layer was visible. But from the air, Atlantis is seen in striking detail as it soars toward orbit on one last flight.

Atlantis is flying a 12-day mission to the International Space Station to deliver critical supplies and hardware to the orbiting outpost. The shuttle is commanded by veteran spaceflyer Chris Ferguson, with pilot Doug Hurley and mission specialists Sandra Magnus and Rex Walheim rounding out the crew.

This mission marks the 33rd flight of Atlantis and the 135th mission of NASA's 30-year shuttle program. NASA is retiring its three-shuttle fleet to make way for a new deep space exploration plan aimed at sending astronauts to visit an asteroid by 2025.

Visit SPACE.com for complete coverage of Atlantis' final mission STS-135 or follow us @Spacedotcom and on Facebook.