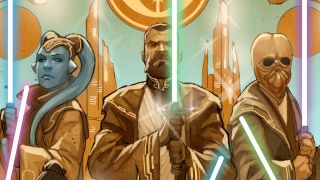 "Star Wars" is starting an epic "storytelling initiative" to fill out the history of the franchise some 200 years before the events of the 1999 movie "Star Wars: The Phantom Menace."

The franchise began in 1977 and has been releasing a new film every year since "The Force Awakens" in 2015. "Star Wars" is well-known for portraying the ongoing battle between lightsaber-wielding Jedi knights and forces of evil. But the new books and comics come from a happier time, Disney Publishing Worldwide said in a press release.

Related: Baby Yoda toys from 'Star Wars' will launch an unstoppable campaign of cuteness this year

As for why the series is set so long before the movies, Disney said it would be so the timeline "will not overlap any of the films or series currently planned for production." The comic-publishing program is planned in several phases; the first one will be called "Light of the Jedi." Other titles include "Into the Dark" and "A Test of Courage."

"We are so excited to be opening up such a rich, fertile era for our authors to explore," Kathleen Kennedy, president of the production company Lucasfilm, said in the statement. "We'll get to see the Jedi in their prime."

Many well-known authors are participating in the project. They include Claudia Gray, Charles Soule, Justina Ireland, Daniel José Older and Cavan Scott. Comics and books will be released at Star Wars Celebration Anaheim in August 2020, and some of the titles are available now for pre-order, Disney added.