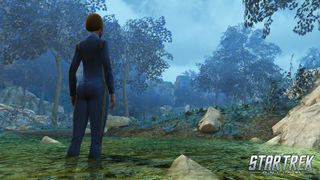 Until May 28, all Star Trek Online captains can participate in the "Defense of Pahvo" event on PC, Xbox One and PlayStation 4.
(Image: © Arc Games)

Whether you're a starship captain or dungeon master, a new "Star Trek Online" and "Neverwinter" video game collaboration will let you join a mission to help those in need.

Head over to Groupees.com/PlayForACause to purchase in-game items such as outfits, vessels and a limited period of VIP access to your preferred game or games. All of the profits sent to the companies hosting these games — Perfect World Entertainment for "Star Trek Online," and Cryptic Studios for the "Dungeons & Dragons" iteration "Neverwinter" — will be split between two non-profit organizations.

Related: The space game 'Stellaris' is free to play on Steam this week for its 4th anniversary

And if you're looking for opportunity to deploy your skins and new ships, "Star Trek Online" definitely has you covered. Until May 28, all captains can participate in the "Defense of Pahvo" event on PC, Xbox One and PlayStation 4. Players will need to complete two task force operations missions (one in space, and one on the ground) to win a KIDD Drone Universal Kit.

To honor first responders to the novel coronavirus pandemic, "Star Trek Online" also is hosting a medical pack giveaway that includes a Vanity Shield, Holo Bashir Bridge Officer (Federation), Emergency Medical Hologram Bridge Officer (Klingon) and a new Admiralty card for the medical ship, the U.S.S. Hope. This giveaway is also available on PC and consoles as of May 7.

And sometime in the near future, "Star Trek Online" will release real-life models of the game's most epic starships, in partnership with Hero Collector. Pre-orders are available now for two ships: the Chimera-Class Heavy Destroyer and the Gagarin Miracle Worker Battlecruiser.