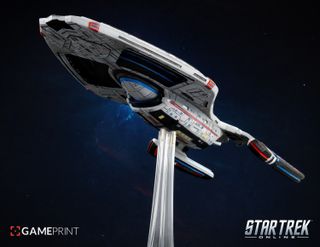 "Star Trek Online" players can put a lot of time into choosing, outfitting and customizing their starships, and now that work can follow them into the real world — with hand-painted 3D-printed starships based on their exact designs.

Perfect World Entertainment Inc., the owner of the free massively multiplayer online game, announced on Feb. 20 that 3D-printed versions of nearly every starship available in the game will be available starting in March, in partnership with the San Francisco-based company Mixed Dimensions. The starships will be uploaded directly from the PC version of the game into the company's GamePrint website for production.

"We are absolutely elated to expand 'Star Trek Online' to the physical universe," Stephen Ricossa, executive producer for "Star Trek Online," said in a statement. "Our new partnership with Mixed Dimensions will allow our community to immortalize their favorite starships. We can't wait to see the reaction from our captains when the first wave of ships begin to roll out.

Players can choose either a hand-painted, 12-inch (30 centimeter) resin collectable version of the ship, a single-color version or a primed version, which the player can paint at home.

Twenty of the most popular "Star Trek Online" ships will also be available as completed models, without the customization.