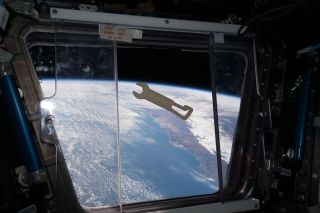 NEW YORK — The California company Made In Space, known for providing the first 3D printer on the International Space Station, has big goals for space-borne manufacturing — for both people in space and those back on Earth.

Made In Space's Matt Napoli took the floor at the Dawn of Private Space Science conference here at Columbia University earlier this month to discuss the company's progress toward several goals: 3D printing useful experiments and tools on the space station, preparing to print fiber-optic cable to sell on Earth and designing a 3D-printing spacecraft to assemble large structures in the void.

"We've been doing it for a couple years now, so it's getting to be a bit day-to-day and kind of normal for us — but really, we're teleporting these things to the space station in a matter of hours," Napoli said at the meeting June 4. "It's still really cool." ['Archinaut' Spacecraft Could Build Huge Structures in Space (Videos)]

The company sent its first 3D printer to the space station in September 2014, and then sent a more advanced one in 2016, in partnership with the store Lowe's. The printer can use three kinds of plastics and notifies the crew to retrieve a part when it has finished printing.

"Anyone that wants something in space, they come to us, and we'll work to get it up there," Napoli said.

So far, the space station printer has been used to print medical tools designed by doctors, tools to use around the station and even a game designed by students in Oakland, California, responding to an astronaut who wanted more to do while in space.

Made In Space has also printed plastic shielding to test with radiation sensors inside the station's inflatable BEAM module and send information back to the module's manufacturer, Bigelow. The process will help Bigelow determine whether more shielding is necessary.

The space-based printer is also experimenting with different kinds of plastics to use in space; eventually, using plastic made from sugarcane, astronauts could grow their own materials to build what they need, Napoli said.

Besides building tools for use in orbit, Made In Space will also be building something in space for use on Earth: a super-efficient fiber-optic cable.

"We're going to build fiber optic fiber in space and take advantage of the microgravity environment to build a better product, bring it back to Earth and sell the product on Earth," Napoli said. "That's a revolutionary new thing, and something that usually has been limited to data [taken in space and sent back down] — a picture of the Earth or sensing information. Now it's going to be a physical item."

ZBLAN optical fiber is costly to make on Earth, because it forms with more impurities under the influence of gravity. But if it's purer, Napoli said, it can be 100 times better than other fiber optic cable: Light can travel further without needing a repeater to amplify, and more bandwidth can go through the fiber at once.

Because that fiber is so expensive to make on the ground, the company will be able to make a profit by sending it back from space once the process is refined, Napoli added.

"The interesting story about this is, on the research side, this isn't funded by NASA. They stopped funding it in the '90s," Napoli said. "This is funded internally by Made In Space. We've been able to leverage a lot of the hardware we used for our 3D printer to lower down the cost of it and partner with an expert in this material, and really do this grassroots, just from us, to show that it works.

"And then, from there, we'll figure out how to scale it up and build a whole business and industry out of it," he added.

Another project, called Archinaut, would act as a mobile 3D printer to build structures in space that are as long as needed.

"One of the core technologies is a 3D printer without a bottom, so we can build these trusses that just go infinitely long," Napoli said. Made In Space is testing out the process in a vacuum chamber on Earth, and the method could someday allow the company to construct things for space that can't be folded up and launched in a spacecraft, like large infrastructure or even space telescopes, he said. Simpler structures, like trusses, could be printed in lower resolution to build much more quickly than finer-grained tools and technology.

Napoli described a future in which most in-space construction is built using that kind of iterative process. A space habitat could even make use of a technology, like chains of solar panels, as they were being built out over time, he said. And using similar principles, people could someday print landing pads, roads and buildings on other planets that they visit, he added.

NASA selected Archinaut for funding in November 2015, and since then, the project has assembled and tested versions of the 3D-printing spacecraft on the ground; the next step will be to add robotic arms to help with assembly. After that, if Archinaut makes it to NASA's Phase 2 funding, the time may come for a demonstration flight in Earth orbit, Napoli said.

It would represent a huge step forward as humanity learns and grows in space, he said.