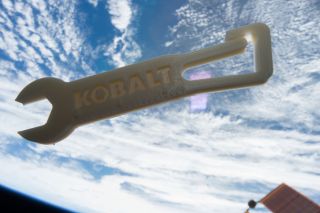 The Additive Manufacturing Facility, a commercial 3D printer aboard the International Space Station, printed this wrench (its first tool) in June 2016.
(Image: © NASA/Made In Space/Lowe's)

The first commercial 3D printer in space is up and running.

The machine, known as the Additive Manufacturing Facility (AMF), was installed aboard the International Space Station (ISS) in late April. And last week, it printed out its first tool — a wrench that astronauts can use to do maintenance work aboard the orbiting lab.

The wrench was made with a special off-Earth feature — a fastening clip that should help astronauts keep track of the tool in zero g.

The AMF was built by California-based company Made In Space, which also constructed the only other 3D printer ever sent to space.

That first one made it to the orbiting lab in September 2014, as part of a NASA-funded project designed to test how 3D printing works in space. NASA sees a bright future for the technology, which space agency officials have said could help make spaceflight cheaper and voyaging spaceships more self-sufficient.

Everything went well with the trial run, so Made In Space proceeded with the AMF, which is a fully operational commercial machine owned by the company (as opposed to the technology-demonstration version, which NASA bought).

The AMF "can be accessed by any Earth-bound customer for job-specific work, like a machine shop in space. Example use cases include a medical device company prototyping space-optimized designs, or a satellite manufacturer testing new deployable geometries, or creating tools for ISS crew members," Made In Space representatives wrote in a blog post after the AMF's installation.

As of late April, the AMF had about six months' worth of printing activities already lined up, Made In Space representatives added.

Made In Space is partnering with the home-improvement store Lowe's on AMF, as the newly printed tool demonstrates: It has the name of tool-making company Kobalt emblazoned on its side.

The wrench "demonstrates the capability of the AMF to manufacture purpose-specific tools and hardware on demand," Jenny Popis, manager of corporate public relations at Lowe's, told Space.com via email.