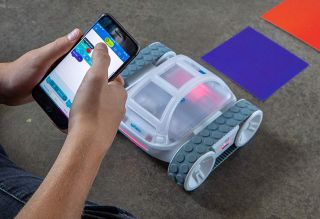 If you have a budding astro-engineer in need of a rover pal for the holidays, Amazon has cut the price of the Sphero RVR Coding Robot by 20% this holiday season.

The sale is a $50 markdown from the Sphero RVR's typical price of $249.99 for the sleek, versatile robot. There are a lot of robots and STEAM rover kits out there, but the Sphero RVR stands out with the rugged design and cornucopia of programmable features to teach coding to kids (and maybe some adults like yours truly).

Sphero RVR does come prebuilt and includes the Sphero Edu app for smartphones and other devices, which allows kids to program commands with a simple block-based language. It can be programmed with Javascript, too, for those more computer literate than myself.

The Sphero RVR is rugged programmable robot for kids and adults that comes with a range of sensors to detect color, light and infrared, as well an accelerometer and gyroscope.View Deal

Sphero RVR carries a color sensor, light meter and infrared (IR) sensor), along with some programmable RGB lights that make it look like something straight out of "Tron." It also has an accelerometer and gyroscope on board, and its rechargeable battery is removable.

My colleague Avram Piltch at our sister site Tom's Hardware has been testing the Sphere RVR for the last few weeks and thinks its best qualities are a built-in serial port, which allows users to connect a Raspberry Pi, and a USB port and mounting plate to support the computer add-on. He had this to say about the Sphero RVR:

"Using Sphero's python API and a Raspberry Pi Zero W, my son and I programmed our RVR to change its LED lights to match whatever the color sensor sees. Even better, we could attach a robotic arm, a live streaming camera or any other set of sensors to the Pi and use those to control the RVR."

The folks at Sphero clearly think there's more than just fun uses for the RVR. They envision its potential use as a remote weather monitor for outdoor work.