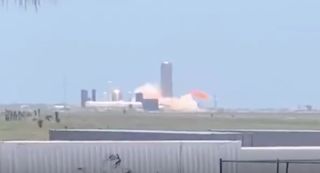 SpaceX's SN4 Starship prototype tests its Raptor engine during a static-fire trial in South Texas on May 19, 2020.
(Image: © SPadre.com)

SpaceX tested the engine on its latest Starship prototype again yesterday (May 19), and the trial produced a little more flame than the company had planned.

The single Raptor engine on Starship SN4 ("Serial No. 4") blazed to life for a few seconds yesterday at SpaceX's South Texas facilities. It appeared to be the SN4's third overall "static fire," a routine preflight engine checkout that occurs while a vehicle is tethered to the ground.

But the flames continued after the Raptor shut down. Video of the test captured by SPadre.com, "Everyday Astronaut" Tim Dodd and others showed fire licking the base of the SN4 for several minutes and a crew coming onto the scene to douse the blaze with a hose.

The flare-up was neither unprecedented nor a disaster. SN4 is still standing, and the fire wasn't nearly as dramatic as the one that the very first Starship prototype, the stubby Starhopper, survived on the test stand in July 2019. Starhopper went on to ace several short test flights over the next month before being retired.

But we now may have to wait a bit longer for SN4's highly anticipated first flight, a 500-foot-high (150 meters) uncrewed jaunt for which the static fires have been laying the groundwork.

SpaceX had apparently been hoping to perform that flight this week. On Monday (May 18), the U.S. Federal Aviation Administration issued a NOTAM ("notice to airmen") that identified Thursday (May 21) as a potential target date. If SN4 sustained any damage yesterday, however, the flight plans will likely have to be pushed back. (SpaceX founder and CEO Elon Musk had not commented on yesterday's events by the time of publication; this story will be updated if and when he does tweet about it.)

Starship is SpaceX's Mars-colonization architecture. The system consists of a 100-passenger spaceship called Starship and a giant rocket called Super Heavy, both of which will be fully reusable. Both will be powered by Raptor engines, six on Starship and 31 on Super Heavy, Musk has said.

SN4 is far from the last prototype on the road to the final Starship design. Construction of the three-engine SN5, which SpaceX wants to fly to an altitude of 12 miles (20 kilometers), appears to be quite far along, and the SN6 is already coming together in South Texas as well.

This work will bear fruit in the very near future, if all goes according to plan. SpaceX representatives have said that Starship could begin flying operational missions — likely communication-satellite launches at first — by 2021 if development and testing go well.