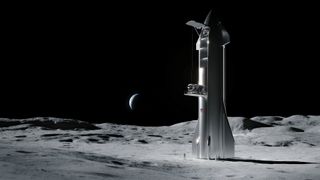 Artist's illustration of SpaceX's Starship on the moon.
(Image: © SpaceX)

The coronavirus pandemic isn't shrinking every part of the job market.

For example, SpaceX is looking to hire lots of folks to help ramp up production and testing of its ambitious Starship Mars-colonizing architecture over the coming months — and the company recently issued a public recruiting pitch.

"The design goal for Starship is three flights per day on average [per ship], which equates to roughly 1,000 flights per year at greater than 100 tons per flight. This means every 10 ships would yield 1 megaton per year to orbit," Jessica Anderson, a lead manufacturing engineer at SpaceX, said last week during the launch webcast for the company's latest batch of Starlink internet satellites.

"This is a significant effort, and we are looking for highly skilled engineers and welders to help us make this a reality," Anderson added. "If you're interested in joining the team, please take a look at SpaceX.com/careers."

At the moment, that website lists more than 600 current SpaceX job opportunities, most of them based at the company's headquarters in Hawthorne, California. But about 60 of the offered positions are at SpaceX's South Texas facility, near the village of Boca Chica, where Starship is being built.

The Starship system consists of a 165-foot-tall (50 meters) spacecraft called Starship, which SpaceX founder and CEO Elon Musk has said will be capable of carrying up to 100 people. Starship will launch to Earth orbit atop a huge rocket called Super Heavy, then make its own way to the Red Planet, the moon or anywhere else a mission may demand.

Both Starship and Super Heavy will be fully and rapidly reusable. For example, Super Heavy will come back to Earth for vertical landings shortly after liftoff, as the first stages of SpaceX Falcon 9 and Falcon Heavy rockets already do. And the company wants each Starship to fly often as well, as Anderson noted during last week's Starlink webcast.

Reuse won't apply just to the Starship spacecraft that deliver payloads to Earth orbit. The vehicles that go to the moon, Mars and other distant destinations will also fly multiple missions, Musk has said. Starship will feature six of SpaceX's Raptor engines and therefore be powerful enough to launch itself off the lunar or Martian surface, without the need for Super Heavy. (Mars and the moon are much smaller than Earth and thus have a weaker gravitational pull.)

Super Heavy will be powered by up to 37 Raptors, Musk has said. So, while SpaceX aims to carry out brief flight tests in the near future with the current Starship prototype, known as the SN3, and longer demo missions shortly thereafter with the SN4, "ramping up our Starship and Raptor production line is what matters most," Anderson said.

SpaceX wants to get Starship fully up and running fast. If all goes well with development and testing, the system could start flying its first operational missions — probably satellite launches to Earth orbit — by 2021, company representatives have said.

And there's one crewed mission on the docket already. Japanese billionaire Yusaku Maezawa booked Starship for a round-the-moon trip, with a target launch date of 2023.