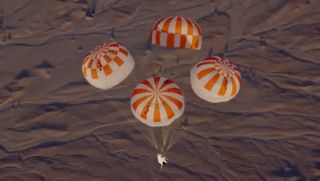 A SpaceX Crew Dragon space capsule aces the company's 16th mock abort parachute test in Southern California in the summer of 2018. This image is a still from a SpaceX video.
(Image: © SpaceX)

It was the first appearance of Musk and Bridenstine together since the two space titans traded seemingly critical comments after Musk's recent appearance touting his Starship Mars-colonization craft. At that time, Bridenstine tweeted congratulations to SpaceX on the company's Starship progress but noted that the Commercial Crew program was dramatically behind schedule, adding, "It's time to deliver."

While the admonishment was seemingly directed at both of NASA's Commercial Crew contractors, SpaceX and Boeing (which is building a capsule called CST-100 Starliner), Musk quickly responded in a CNN interview with: "Did he say Commercial Crew or SLS?", implying that Boeing's delays on NASA's giant Space Launch System rocket were a far larger problem. This seemingly snarky exchange seems to be behind them now, however. At last Thursday's (Oct. 10) news conference, the two agreed that testing for the Crew Dragon is proceeding apace.

Prominent among the many remaining tests that need to be performed before astronauts can fly in the Crew Dragon are trials of the capsule's launch abort system and its parachutes, both of which have experienced difficulties during recent tests. A Crew Dragon exploded during abort-engine testing last April, but the problem with the SuperDraco abort engines seems to have been identified and fixed, Musk said.

Musk discussed the addition of a burst disk, which relieves fuel overpressure without leaking. This new hardware isolates the abort system from the orbital maneuvering system, Musk said, and replaces a valve that leaked and caused the explosion. But the parachutes are perhaps a more complex problem.

Also in April, a Crew Dragon parachute test did not go as planned. Although one chute was intentionally crippled (to test a landing with only three parachutes instead of the intended four), the other three did not inflate successfully, resulting in a critically hard landing that could have severely injured crewmembers had any been on board. That result has created understandable concern in the spaceflight community.

"There have been a lot of concerns about parachutes," Bridenstine said. But, he added, "Where we are today is, I think, a very positive position ... [SpaceX is] putting as much resources and manpower as they can to getting those parachutes ready so that ultimately we can have consistent, repeatable performance."

Indeed, the company has been working diligently on the parachutes, according to Musk, and is now moving from what he calls the Mark 2 version to the Mark 3. "We think the Mark 2 parachutes ... are safe, but the Mark 3 parachutes are possibly 10 times safer," Musk said. "If you were to compare the margin of safety of the Mark 3 parachutes to, say, Apollo, this is twice the safety factor of Apollo. It's a really good design."

Musk went on to say that the problem with the Crew Dragon parachutes is not dissimilar to those that bedeviled the Apollo program. At that time, the Apollo spacecraft, which weighed 13,000 lbs. (5,900 kilograms) upon reentry, was far and away the heaviest spacecraft ever recovered by parachute, and when returning from the moon, involved the highest speeds.

Between 1963 and 1968, NASA conducted at least 34 test drops of the Apollo parachutes. As Musk and others frequently remind us, "space is hard," and coming back from space is one of the hardest parts of spaceflight. And with the Crew Dragon weighing over 20,000 lbs. (9,000 kg) at reentry, getting the parachutes right is extra challenging.

Similar problems were encountered by NASA's Jet Propulsion Laboratory when designing supersonic parachutes to land the Mars Science Laboratory mission (more commonly known as the Curiosity rover) in 2012. As Rob Manning, then the chief engineer for MSL, said at the time, "Parachutes are always a problem. The soft bits are the difficult part ... you can test metal, and  when you pull it, it will break under a given amount of force. You can't do that with fabric, though; it just doesn't cooperate ... fabric has a much more empirical trial-and-error aspect." He likened the behavior of parachutes to that of an unpredictable, wild animal — one for which software simulations are of little help. You just have to test them again and again, in real-world conditions.

Musk continued, "The parachutes ... look easy, but they are definitely not easy," adding that parachute design "was actually one of the toughest things in the Apollo program." Bridenstine then noted that the parachutes are "not easy to model. What we need to have is consistent, repeatable performance. We need a lot of drop tests ... we could see as many as 10 drop tests between now and the end of the year." But he mentioned that the total number of tests would depend on how successful each test was.

The Crew Dragon was originally intended to descend onto dry land using its SuperDraco thrusters (the same capsule-mounted rocket engines that power the abort system) instead of parachutes. The design was later changed to splash down into the ocean using parachutes, leveraging experience from the Apollo program. The spacecraft will use four parachutes (as opposed to Apollo's three), with two drogue chutes to pull the main parachutes free of the capsule's nose.

The company recently redesigned the parachutes for the Crew Dragon, designating the designs as Mark 1, Mk 2 and Mk 3. The current tests are on the newest design, the Mk 3. While the previous generation of parachutes was apparently safe, there was not a sufficient safety margin to satisfy both NASA and SpaceX, Musk said.

Bridenstine said that SpaceX planned "to have the first successful drop tests of the Mk 3 within a week or two, and then there'll be a steady cadence of tests thereafter." He did not give a planned date for the conclusion of these tests of the new design, but said, "We certainly want to get at least something on the order of 10 successful tests in a row before launching astronauts." To date, SpaceX has reportedly completed upward of 50 parachute tests with only a couple of failures.

"The biggest difference between the Mk 2 and Mk 3 is going to much stronger lines in the parachutes, from essentially nylon to Zylon," Musk said. "The strength of the lines is about three times that of nylon, perhaps arguably more. And then there were some changes to the stitching pattern.There are certain places where the load concentrates basically where the ... lines connect to the canopy. You've got a stress concentration, and so you want to ... spread the load at the stress concentration where the lines meet the canopy."

This testing is of course critical to the success of Crew Dragon and SpaceX's overall commitment to deliver U.S. astronauts to the ISS. But the testing benefits other companies' efforts, such as those involving Boeing's Starliner, as well.

"NASA can take that data and that information that we get from our great partners and we can apply it across the agency as a whole to make sure that our astronauts will be safe," Bridenstine said. "And when one partner is successful, that success is applicable to all the partners because human safety is the number one priority."

Musk added, "I've been very, very clear with Jim that any SpaceX data should not be considered proprietary, and it can be used by any of our competitors ... no charge."

Until SpaceX and Boeing are ready to launch safely, NASA must continue to purchase seats on Russia's Soyuz spacecraft, and this must be done well in advance — a vexing problem when the U.S. suppliers' programs are behind schedule. And at $85 million per seat, Soyuz rides don't come cheap, so the clock is ticking.

"I will say that we are getting very close, and we're very confident that in the first part of next year we will be ready to launch American astronauts on American rockets," Bridenstine said, "We are not going to take any undue risks because the safety of our astronauts and the success of the mission is the highest priority."

Rod Pyle is an author and editor-in-chief of the National Space Society's Ad Astra magazine and author of "First On the Moon: The Apollo 11 50th Anniversary Experience," which came out in April 2019. Follow us on Twitter @Spacedotcom and on Facebook.