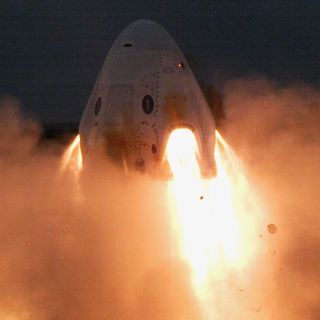 SpaceX test-fired the eight SuperDraco launch abort engines on its Crew Dragon spacecraft in a successful ground test on a pad at the Cape Canaveral Air Force Station in Florida on Nov. 13, 2019. The system is designed to keep astronauts safe in a launch emergency.
(Image: © SpaceX)

SpaceX's Crew Dragon astronaut taxi will get off the ground again this month, if all goes according to plan.

SpaceX is gearing up for a crucial, uncrewed in-flight abort (IFA) trial, which will take place at NASA's Kennedy Space Center in Florida. Crew Dragon will lift off atop SpaceX's Falcon 9 rocket, then blast itself away from the booster using its onboard SuperDraco escape thrusters, showcasing the ability to keep astronauts safe in the event of a launch emergency.

The SuperDracos performed well during a ground test last month, as did the capsule's regular Draco orbital thrusters, said Jessica Jensen, director of Dragon Mission Management at SpaceX. So, the company may be able to meet its previously stated goal of launching the IFA before the end of the year.

Related: In Photos: A Behind-the-Scenes Look at SpaceX's Crew Dragon

"We're targeting December," Jensen said today (Dec. 3) during a news conference discussing tomorrow's (Dec. 4) planned launch of a robotic Dragon cargo mission to the International Space Station (ISS). "We'll see if we can get there."

SpaceX holds a multibillion-dollar NASA contract to ferry astronauts to and from the ISS using Crew Dragon and the Falcon 9. The capsule has already visited the orbiting lab once, on the landmark uncrewed Demo-1 mission this past March. If everything goes well with the IFA, the company will be cleared for the first crewed mission — a test flight known as Demo-2 that will carry NASA astronauts Doug Hurley and Bob Behnken.

Boeing also signed a NASA Commercial Crew deal, which the aerospace giant will fulfill using a capsule called the CST-100 Starliner and United Launch Alliance Atlas V rockets. Starliner is scheduled to launch on its version of Demo-1, the uncrewed Orbital Flight Test, on Dec. 19.

NASA signed these contracts to help fill the role of the space shuttle fleet, which was retired in July 2011. Ever since then, the agency has been dependent on Russian Soyuz spacecraft to get its astronauts to and from the ISS.

To date, Boeing has received $4.82 billion from NASA's Commercial Crew Program, and SpaceX has gotten $3.14 billion.

Tomorrow's Dragon cargo flight will be the 19th robotic resupply mission that SpaceX has flown under a separate NASA contract. The uncrewed capsule is scheduled to launch atop a Falcon 9 from Cape Canaveral Air Force Station in Florida at 12:51 p.m. EST (1751 GMT). You can watch it live here at Space.com, courtesy of NASA, or directly via the space agency.

This will be the third ISS visit for this particular Dragon, which also flew cargo missions in September 2014 and June 2017.