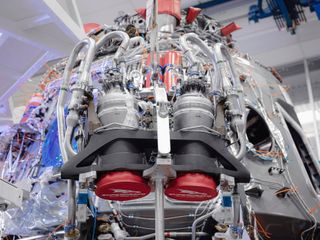 A look at two of the recently installed SuperDraco escape thrusters on SpaceX's Crew Dragon capsule.
(Image: © SpaceX via Twitter)

SpaceX recently installed Crew Dragon's eight SuperDraco abort engines, which are designed to jet the capsule away from its Falcon 9 rocket ride in the event of a launch emergency. The SuperDracos will strut their stuff during an uncrewed in-flight abort (IFA) test, which will lift off from Florida's Cape Canaveral Air Force Station and remain in Earth's atmosphere from start to finish.

And the IFA, a critical step on Crew Dragon's path to operational flight, will happen soon, if all goes according to plan.

Related: In Photos: A Behind-the-Scenes Look at SpaceX's Crew Dragon

"Hard to say with high accuracy, but 4 to 6 weeks is my best guess," Musk tweeted yesterday (Oct. 29), in response to a Twitter follower who asked about an IFA target date.

SpaceX has been developing Crew Dragon under a $2.6 billion contract with NASA's Commercial Crew Program. Boeing got a similar deal, snaring $4.2 billion to get its CST-100 Starliner capsule up and running.

Encouraging the development of private American crewed vehicles is important to NASA, which has been dependent on Russian Soyuz spacecraft to get its astronauts to and from the International Space Station (ISS) since the space shuttle fleet was grounded in 2011. NASA is currently paying about $85 million for each seat on the Soyuz, which can fit three astronauts. (Both Crew Dragon and Starliner can accommodate seven crewmembers.)

Crew Dragon has one trip to the ISS under its belt, an uncrewed jaunt known as Demo-1 that launched on March 2 and came back to Earth six days later. But that particular capsule was destroyed in April during a series of engine tests on the ground, in an accident that delayed the IFA test significantly. (That same Crew Dragon was originally supposed to perform the in-flight abort.)

SpaceX traced the problem to a faulty valve in the abort-engine system and revised designs to prevent it from happening again, Musk has said.

If everything goes well with the upcoming IFA, SpaceX will be clear to proceed with Demo-2, a demonstration mission that will carry NASA astronauts Doug Hurley and Bob Behnken to and from the orbiting lab. Operational, contracted flights would then follow.

Starliner has not yet flown to the ISS. But that could change soon; Boeing is planning to launch an uncrewed test flight to the orbiting lab in mid-December.