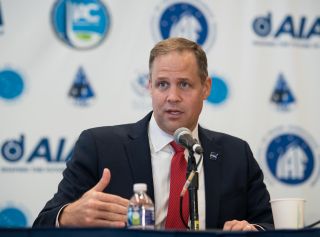 WASHINGTON — The next 50 years of human spaceflight will surely see a proliferation of private companies working in space alongside government agencies – but how they will work together is a matter of intense debate, as evidenced in a livestreamed discussion with industry leaders.

Representatives from private companies and government alike discussed the matter at the International Astronautical Congress (IAC) Monday (Oct. 21) in Washington, starting with the popular policy discussion of the day – returning astronauts to the moon.

The panel was formed this summer after the Apollo 11 50th anniversary celebrations of the first moon landing by NASA astronauts in July 1969. NASA has a directive from the Trump administration to return astronauts (including the first woman) to the moon's surface by 2024.

The European Space Agency (ESA), which is considering joining the push, discussed its "moon village" – an idea of the last few years that would allow private, government and other entities to work together on the lunar surface for goals ranging from mining to space tourism. Director Johann-Dietrich Wörner clarified, however, that the ESA is not planning to go to the moon to stay, as NASA wants to.

"I'm against colonization of the moon and I'm against colonization of Mars," Wörner said during the IAC discussion. "Why? Because colonization means you are moving away people from the Earth, for the rest of their lives or maybe even for generations, on the moon and Mars." Neither is suitable for humans to explore unprotected, he said, adding that he didn't like the idea of traveling to another planet simply because our planet is becoming permanently altered by climate change.

Ellen Stofan, the John and Adrienne Mars director of the Smithsonian Institution's National Air and Space Museum, agreed with the concept, while noting that using the word "colonization" is fraught. (It also has connotations concerning how Native Americans and other indigenous people were negatively treated after European settlers arrived in North America.) Quoting science popularizer Carl Sagan, Stofan said, "This is where we make our stand," about living on planet Earth.

And the lines between public government agencies and private companies are still being figured out amid these policy discussions, said George Nield, president of Commercial Space Technologies LLC and former associate administrator for commercial spaceflight at the Federal Aviation Administration.

He suggested the "role [of agencies] needs to change over time … [because] I think now there's a different set of responsibilities that could help to grow that global space economy." For example, he said, the governments could define a strategic vision and take on a role such as developing infrastructure or creating space-business-friendly policies.

While the policy role of future lunar settlers remains an open question, companies are already working on ideas to bring in innovation while being as inclusive of diverse groups as possible, the IAC panelists said.

Lockheed Martin – which sees the moon as a proving ground to practice exploration closer to home for Mars exploration, just like NASA – is the company leading the construction of NASA's Orion spacecraft. Orion is the vessel NASA plans to use to travel between the Earth and lunar orbit. The company is looking at innovations in  manufacturing, said Lisa Callahan, vice president and general manager of commercial civil space at Lockheed Martin.

"We're making a digital model of Orion using AR [augmented reality] technology on the floor, and the manufacturing facility. Our technicians can see, through goggles, their work instructions," she said, adding that the AR technology is saving 90% of labor costs already.

The company is also trying to build out the space ecosystem by spending 60% of its program dollars on suppliers, and of that money, 30% goes to small businesses, Callahan said. "We do a lot of partnerships," she said, including those with "my colleague to the left" – meaning, Nanoracks CEO Jeffrey Manber, who was also participating in the panel at IAC.

Manber said the idea of space entrepreneurs didn't even exist 20 years ago, which is interesting as Nanoracks now manages a facility on the International Space Station (ISS) where various space companies test their technology, ranging from 3D printing to the growth of plants. "I think we're close to having automated laboratories," he added, which would be a different concept than the astronaut- or ground-tended laboratories on the ISS. If this goes forward, it would save astronauts time and allow them to focus on more specialized tasks that require more human ingenuity.

But space is also going to have to open up to more players, the panelists said. Stofan asked why it took 25 years to move from the first female spacewalk in 1984 to the first all-female spacewalk, which took place only last week. Meanwhile, Wörner advocated for space partnerships with countries such as China, which do not share the same social framework as the United States or Europe. But by doing partnerships, he said, it encourages each country to better understand the other's perspective.