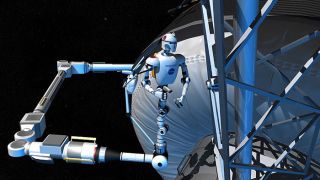 ALBUQUERQUE, NEW MEXICO -- An initial step towards the creation of mass transit beyond our planet is the emerging public space travel market.

At present, a number of technologies are being developed for other applications by non-aerospace industries deemed useful in fostering space colonization. These technologies will automate many aspects of large scale space system development, as well as drive down costs - thereby advancing the onset of colonization.

That's the view among a group of visionary practitioners of the future taking part in the Space Technology & Applications International Forum (STAIF), held here February 13-17.

Advances in such areas as propulsion, power, using space resources, and giving other worlds a planetary makeover through terraforming -- along with public space travel -- are hastening the day of space colonization.

"There are so many things underway now that relate to space colonization. The International Space Station is part of this too, as well as the long-term potential for terraforming Mars into another planet for humans to live on," Rice told SPACE.com.

Rice said that the growing business of public space tourism "is really the spirit of colonization." The giggle factor of citizen space travelers is totally gone, he said.

Part of that "de-giggling", Rice said, stems from last year's set of flights by SpaceShipOne. Then there's the work of Las Vegas, Nevada entrepreneur Robert Bigelow in fabricating inflatable space modules to be planted in Earth orbit. Also the pay-for-a-seat travels to the space station of Dennis Tito and Mark Shuttleworth in past years are milestones along the route, he added.

Lastly, toss in numbers of firms and organizations now busy making space tourism a growing profitable concern. It all adds up to "a quiet revolution," Rice said.

The prognosis for space colonization is good, said Edward McCullough, principal scientist for The Boeing Company in Huntington Beach, California. He pointed to numbers of technologies that are on exponential growth curves - that is, showing signs of increasing rapid growth.

"During the last half of the 20th century, a host of technologies and disciplines which had witnessed millennia of slow or no growth...suddenly went exponential," McCullough reported at the STAIF meeting.

McCullough pointed to photography, chemistry and quantum mechanics that have combined to produce a new industrial revolution. Electrical and mechanical engineering are on courses that appear to indicate unbounded exponential improvement. Delving into the structure of DNA has spurred a better understanding of the cellular processes. The human genome has been sequenced and micro biomechanics has taken off, he said.

Furthermore, the centuries old technology of printing has been extended to three dimensions with inks of polymers, ceramics, wood and metals.

"These technologies have affected other technologies so that now at the dawn of the 21st century, one technology after another is assuming an exponential trajectory," McCullough noted. And all this is good news, he suggested, when one speculates on what these technologies portend for space colonization.

Out of the blue

"There are so many technologies coming on," McCullough told SPACE.com. "The commercial drivers of these technologies are so massive, and the money is so large, that they they're going to come right out of the blue," he said.

There are many more advancements that are already in the pipeline, McCullough said. "Some of the technologies that are out there are going to allow us to do some things that people are going to find incredible."

A few favorites on the Boeing scientist's list are:

But behind any mass colonization movement there are, of course, a few assumptions.

McCullough estimates that a nominal size of a settlement on Mars would support 1,000 people, with a larger colony housing 10,000 individuals.

Once an interplanetary vehicle is crafted that's the size McCullough envisions - and at four flights per year - upwards of 400,000 people could call Mars home in the first decade of deliverance.

Late stage colonies will require large scale equipment. Technologies are needed to assemble these types of vehicles "with little or no touch labor," McCullough said.

Why put Mars in the colonization crosshairs?

"Mars is a planet that has many unusual and spectacular features that will draw people to it," McCullough told the STAIF gathering. "Being a planet rather than a moon, it has undergone many of the geological processes which have caused the formation of minerals on Earth," he said.

That being the case, Mars is a user-friendly world, rife with many industrially useful minerals for construction and manufacturing purposes. It has a suite of "ates", "ites" and "ides" of common metals with common non metals, McCullough pointed out. The red planet is also wrapped in abundant carbon dioxide which will be fairly easy to condense, he said.

Water availability on Mars is another huge plus.

There is abundant evidence of past water activity on Mars. It should be present in permafrost at higher latitudes on the planet. It may also be present in hydrated minerals, McCullough stated.

"The availability of water on Mars in significant quantities would once again simplify our projected industrial activities. This makes extensive bases leading to colonies more likely," McCullough concluded.