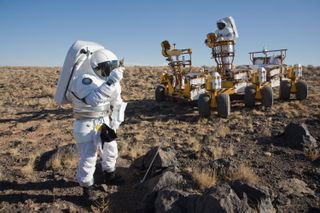 Men and women have been working together in space for decades, but a growing body of research shows that there are important sex-based differences in how people react to spaceflight's physical and psychological stressors.

Crew composition, including factors such as gender and nationality, will be an essential consideration as NASA moves into more-remote space destinations, which is already happening. President Donald Trump's administration recently tasked the agency to return astronauts to the moon in 2024. And the agency plans to go to Mars after that. To build the best Mars crew possible, more research is needed into how gender identity affects the way astronauts will work with each other, researchers say. Putting people together in a team can introduce social interactions and issues that crews must resolve together.

That's a layer of complexity beyond sex-based physical differences in response to space travel, which is an area of ongoing research as well. In 2014, an extensive review was released in the Journal of Women's Health examining these sex-based differences in areas ranging from cardiovascular health to behavioral adaptations. (There's no research available for intersex or transgender people.) The 2014 study examined documented biological differences in the cardiovascular, immune, sensorimotor, musculoskeletal and reproductive systems, as well as in astronaut behavior.

Related: Second NASA Astronaut to Spend Nearly a Year in Space — for Science

"It is imperative to examine and understand the influences that sex and gender have on physiological and psychological changes that occur during spaceflight," the study's researchers wrote in the paper.

The lead author of that study, Saralyn Mark, is now the founder of iGiant, a nonprofit promoting gender- and sex-based design research in sectors including space exploration. She is the former senior medical and policy advisor to the White House, NASA, and the Department of Health and Human Services. Mark briefly discussed findings from this study during a panel discussion at the Humans to Mars Summit held last week in Washington, D.C. That conference explored how space station and moon missions could prepare humans for a trip to the Red Planet.

Studies conducted in space tend to look at small numbers of people (because only so many folks get to fly into space), but some of the results show that "crew composition is extremely important" when considering who should fly to Mars, Mark told Space.com after the panel.

Specifically, Mark said that building a crew with a diversity of backgrounds will be crucial for Mars journeys. That diversity would need to encompass a host of characteristics, including race, age, ethnicity, gender, culture and national representation. While diverse crews "may need to put in more effort up front" in learning about each other's differences, Mark said, having a diverse crew would make the mission stronger in the long run. With a range of backgrounds represented, the crew can avoid groupthink and instead approach problems from different angles.

The stakes are high: Interpersonal relationships could make or break a Mars mission, Mark said. "It's very important to understand how men and women deal with stress," she said. Typically, people respond to stress like arguments or danger with either "fight or flight" approaches, and precisely which an individual will use in a particular situation will vary based on factors including their gender. And in a spacecraft with limited resources, "You can't fight and you can't flee," she said, adding that people of all genders need to develop productive approaches to help each other deal with the stresses of spaceflight.

Going to Mars — without leaving Earth

But the challenge is figuring out the best space crew ahead of the actual mission. Because so few people travel to space, researchers rely on analog missions that simulate a Mars mission here on Earth. Some of these missions visit extreme destinations, such as Antarctica and underwater stations. Others put people  in artificial habitats, with a notable example being the Mars-500 crew that spent 500 days simulating a mission to Mars, Mark said.

These aren't perfect environments for simulating spaceflight; for one thing, people can leave the simulation much more easily than they can a spacecraft. But such experiments provide important insights for researchers like Mark. Analog missions also avoid another key limitation of space-based studies: Any astronaut studies that NASA conducts are necessarily limited by privacy concerns, since the crews are small and the individuals are highly publicized.

These simulation missions don't enlist astronauts, which means their crews receive less training, Gloria Leon, a professor emeritus at the University of Minnesota, told Space.com. This could make study results less reflective of real missions. Leon has published or co-published dozens of studies that examined the behavior of single-gendered, mixed-gendered, single-nationality and multinationality teams.

There are selection issues in these analog missions as well. Participants may not be typical of more-ordinary individuals, since they are often highly trained in medicine and military affairs; they may also have specialized training, such as wilderness first-aid training, for example, that the general population does not possess. All-female crews are poorly studied in isolated conditions such as ship journeys and Antarctic missions (since, historically, men made up most of these crews), and by the same token, the social dynamics of nonbinary gender identies remain unknown.

These differences lead to some interesting results in single-gender and mixed-gender groups. The women tend to take on the role of peacemakers (no matter the genders of their colleagues) and also "don't get directly involved in the conflicts that might be happening, for example, between two men," Leon said.

All-male crews are sometimes prone to the "alpha-male stereotype," with competitive males seeking dominance. Leon recalled an Antarctic study of two British men who fell into this situation. With competition taking precedence over other mission matters, "it was just amazing that they got out alive," Leon said.

"My view is that team selection is very important on the whole," she said, "and having a mixed-gendered group is a very positive aspect — in terms of the diversity and in terms of having individuals with different types of personality characteristics which are compatible with each other."

And for Mars, it's already time to start thinking about crew dynamics. The members of the first Mars crews may already be a part of the NASA astronaut corps, Leon said. The current timeline calls for these missions to happen around the mid-2030s, roughly 15 years from now and well within the career timeline of a current, younger astronaut. The 2017 NASA astronaut class includes five women and seven men, and additional recruits came from other agencies that year, such as the European Space Agency and the Canadian Space Agency.

To prepare for long-duration missions, NASA recently asked for ideas on how to better train astronauts to problem-solve as a group, Leon said, which she added will be even more important on a long-duration mission so far from home. NASA will also need to beef up the way other groups, like mission control and supervising psychologists, provide the support structure astronauts need to succeed in their missions when those flights look toward Mars, she said.

And in the end, while selecting a diverse mix of people will be vital to a Mars mission's success, the astronauts still won't form an effortlessly perfect team.

"There isn't an ideal crew," Leon said. "They have to train together and work hard to get to that part of proficiency [where they can] work well together."