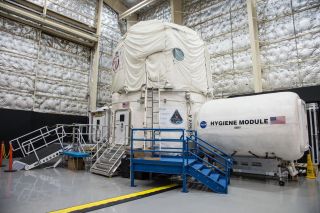 The Human Experimentation Research Analog (HERA) at Houston's Johnson Space Center can house a mock space crew for up to 45 days.
(Image: © NASA)

Astronauts may struggle in solving problems and thinking creatively during long space missions, a preliminary study of an analog environment suggests. The results may be useful when humans run missions to Mars.

Researchers analyzed data from eight sets of crewmembers at an indoor NASA Johnson Space Center spacecraft simulator. In the study, the astronauts were able to finish the tasks being studied only between 20 percent and 60 percent of the time, according to a statement. The mock spacecraft, called Human Experimentation Research Analog (HERA), included sleep deprivation, sound effects, vibrations and communications delays similar to what would be encountered in a deep-space mission. Crews stay in HERA for up to 45 days at a time.

While these eight HERA crews constitute only one part of a larger study led by Northwestern University in Illinois, co-investigator Leslie DeChurch, a communication and psychology professor at Northwestern, said in a statement that NASA needs to better understand the difficulties of long space missions to get tasks right 100 percent of the time. [Tour an Astronaut Habitat for Mock Space Missions]

"Creative thinking and problem-solving are the very things that are really going to matter on a Mars mission," said DeChurch, who is working on the project with Noshir Contractor, a behavioral scientist at Northwestern.

The researchers are building a "predictive model" to help NASA better understand possible conflicts and communication difficulties among space crews. The agency may send astronauts to Mars sometime in the coming decades, after first landing people on the moon using a proposed space station called the Lunar Orbital Platform-Gateway. NASA also uses the International Space Station as a platform to study the effects of spaceflight on physical health (such as weak bones, poor balance and changes in vision) as well as on psychological health (such as isolation or depression).

The researchers will consider the space-travel issues in two analog environments: HERA and the SIRIUS mission held at the Institute of Biomedical Problems (IBMP) in Russia. (Most famously, IBMP hosted a set of missions known as Mars 500, which culminated with a six-person crew doing a 520-day mission in the simulator.)

Now that the researchers have a sense of the challenges astronauts face, the scientists are implementing workarounds for a new phase of the project.

Researchers monitoring the newest HERA crew, which just started work on Friday (Feb. 15), will use the predictive model to anticipate when communication troubles will happen. Then, starting on March 15, the researchers will study two U.S. and four Russian crewmembers, who will complete a fictional, 120-day moon mission and landing at SIRIUS.

"Astronauts are superhumans. They are people who are incredibly physically fit and extremely smart," said DeChurch. "We're taking an already state-of-the-art crew-selection system and making it even better by finding the values, traits and other characteristics that will allow NASA to compose crews that will get along."

Figuring these issues out well ahead of a Mars mission will be important. Using current rocket technology, engineers anticipate that a human landing mission to Mars would take roughly three years. Crewmembers would need to deal with large communication lags due to the average distance of 33.9 million miles (54.6 million kilometers) between Earth and Mars. It would take, on average, about 20 minutes for a message to travel from Mars to Earth, or vice-versa.

The Northwestern researchers are in the middle of four NASA research projects to optimize crew relations on these long journeys. These studies will investigate better structuring crew workflow to accomplish tasks, predicting the likelihood that a specific crew will well work together and with Mission Control, creating "shared mental models" so that crewmembers are encouraged to complete tasks effectively, and more. (However, NASA wants to avoid making these mental models so attractive that crewmembers engage in "group think," a phenomenon in which people agree with each other in large part due to their desire for harmony.)

"The goal is threefold: to establish the effects of isolation and confinement on team functioning, to identify methods to improve team performance, and to develop a predictive model that NASA could use to assemble the ideal team — and identify potential issues with already-composed teams — before and during the mission."

DeChurch and Contractor discussed their findings Feb. 17 at the American Association for the Advancement of Science (AAAS) annual meeting in Washington, D.C.