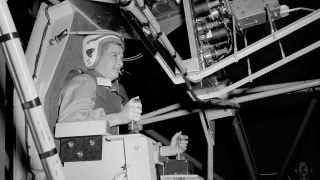 Jerrie Cobb, the first woman to pass all the same preflight tests as NASA's seven Mercury astronauts, has died.

Cobb, whose full first name was Geraldyn, was a record-setting pilot and an outspoken advocate for gender equality in spaceflight who dedicated her later life to Christian missionary work in the Amazon. She was also one of countless American women who have pushed back against sexism and reached for space. She died in March at age 88; her death wasn't publicly confirmed until yesterday (April 18).

She is sometimes called NASA's first female astronaut candidate, but she was not; the agency did not accept women as candidates until 1978, in the class that included Sally Ride, who would become the first American woman in space five years later. But Cobb aired her frustration with NASA's sexism openly, culminating in 1962, when she testified before Congress at hearings that essentially investigated whether the agency was discriminating against women, years before the practice was made illegal.

"She was optimistic in a moment when the U.S. space program still felt very new and open," Margaret Weitekamp, a historian at the Smithsonian National Air and Space Museum, told Space.com.

History took its toll on Cobb and her legacy, leaving her and her colleagues, who were dubbed the Mercury 13 in the 1990s, deep in the shadows cast by Alan Shepard, John Glenn and their fellow astronauts. "The women of the Mercury 13 should have been just as famous," Ellen Stofan, former chief scientist of NASA and current director of the Smithsonian National Air and Space Museum, told Space.com. "They should be inspiring girls today … they should have been there to inspire me."

But although Cobb never broke through the boundary of space, she still left her mark on the world, Weitekamp said. "I always think it's a shame that people focus so much on the door being shut to her for spaceflight, and less on the achievement that it was for any woman to gain access to that kind of sophisticated aeromedical testing at that moment, and to get the kinds of national-level conversations started in that historic moment, when both the women's movement and the space age were starting at essentially the same time," she said.

Cobb, who was born in 1931, became a pilot when she was 16. She purchased her first plane with money earned as a semiprofessional softball player for the Oklahoma City Queens, according to the Smithsonian National Air and Space Museum. She set three separate world aviation records and was the first woman to fly at the prestigious Paris Air Show.

That experience caught the eye of two leading figures of early space medicine, who were looking to test women's capacity to handle the predicted stresses of spaceflight. It wasn't as enlightened as it might sound: They envisioned outposts in space staffed by dozens of people and in need of labor from traditionally "pink-collar" jobs, like secretaries and telephone operators.

Related: Kathy Sullivan, 1st American Woman to Walk in Space, on the All-Female Spacewalk That Could Have Been

When they asked Cobb to undergo the same physical fitness tests they had developed for NASA's first astronauts — but beyond the scope of the agency, as part of a private organization — she jumped at the chance and passed every one of the tests. Then, she dug through national pilot records and recruited 25 other women to take the same tests. Nearly half of them passed.

She also publicly advocated for NASA to recognize that requiring fighter pilot experience as a prerequisite for consideration of the astronaut office was discriminatory because the military didn't let women fly in combat. For several years, she told the media and Congress that NASA should fly the most qualified candidates, regardless of sex, and she endured the costs that came with that public profile.

"Jerrie Cobb was by nature very shy and quiet, and not one to seek the limelight, so it says something about just how important she thought what she was doing was that she subjected herself to media scrutiny as much as she did," Weitekamp said. And that media scrutiny was brutally sexist and objectifying, with even the most prestigious outlets describing her outfits in detail and printing her bust, waist and hip measurements.

By 1964, the Soviet Union had sent the first woman into space with much weaker pilot credentials than Cobb could claim, and NASA had proved itself too close-minded for her to continue the fight. She returned her focus to aviation and, as a lifelong devout Christian, dedicated herself and her plane to missionary work in the Amazon. "Despite what must have been a crushing personal disappointment, she turned it into something positive — so she's such a hero to me," Stofan said. "She persevered, and I think that's an important lesson for everybody, not just women."

It wasn't until 1983 that Sally Ride became the first American woman to fly in space — and it wasn't until 1995 that Eileen Collins became the first female shuttle pilot. Before that flight, Collins arranged for Cobb and several of the female pilots who had joined her in astronaut testing to attend the launch together as her guests to commemorate the groundwork they laid for her own flight.

Despite her accomplishments in aviation and activism, Cobb was best known as the woman who wasn't allowed to become an astronaut. "There's always so much focus on the testing and whether or not the testing went anywhere," Weitekamp said, arguing that's more of a statement about our fascination with astronauts than about Cobb's legacy.

"She got people talking about women's physical capabilities and women's talent in a moment that was a little prescient of the conversations to come in the late '60s and '70s," Weitekamp said. "If there had been more of a structure for [feminist activism], what a difference that might have made. She was so much on the cutting edge that she was really out there by herself pushing for this."