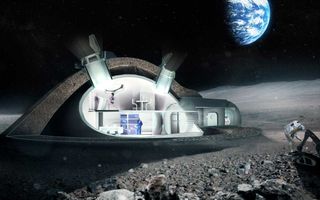 Inside look at one idea the European Space Agency is exploring in its formulation of a "moon village" that incorporates 3D printing.
(Image: © ESA/ Foster + Partners)

COLORADO SPRINGS, Colorado — The European Space agency is pressing forward in its plans to set up a permanent human outpost on the moon.

This envisioned "moon village," a product of international collaboration between spacefaring nations, will be a base for science, business, mining and even tourism, Johann-Dietrich Wörner, director general of the European Space Agency (ESA), said here during the 32nd Space Symposium earlier this month.

The moon village would be open for use by ESA member states and other nations around the globe, Wörner said. ESA regards the moon as the next logical destination for humans beyond low Earth orbit, and utilizing Earth's nearest neighbor should pave the way for human missions to Mars, he added. [Home on the Moon: How to Build a Lunar Colony (Infographic)]

"I think we should go first to the moon and then further on," Wörner said on April 13, during a session at the symposium called "New Generation Space Leaders Panel: The Future of Human Spaceflight."

"I would not call Mars the ultimate goal. I am quite sure humans will go further," he added.

It takes a moon village

Wörner said the term "moon village" was chosen advisedly, to help people understand the purpose of such an outpost.

"A village is something where different people are gathering with different capabilities, different opportunities, and then they build a community," Wörner said. "It’s not one village with some houses, a church."

The idea, he added, is to bring together a variety of different actors from the public and private sectors.

"But for me, it’s also a stepping-stone, a test bed ... to go further, for instance, to Mars and beyond," Wörner said.

NASA aims to get astronauts to the vicinity of Mars by the end of the 2030s. This ambitious effort will require broad international cooperation, space agency officials have said.

Lunar exploration will likely get a big boost in the next decade, thanks to rising interest in the moon in Europe and other parts of the world.

That view is expressed in a new ESA brochure now in circulation. The brochure draws upon findings from a conference called "International Symposium on Moon 2020-2030: A New Era of Human and Robotic Exploration," which was held in December at ESA's European Space Research and Technology Center in Noordwijk, the Netherlands.

"One driver of this renewed interest in the moon is to assess the economic feasibility of using lunar resources for sustaining human surface-exploration activities," the brochure states.

Data from recent moon-orbiting missions and new analyses of lunar material brought to Earth by Apollo astronauts "show that the moon is the closest place to Earth where we can find clues to the history of the solar system, including that of the early Earth and of the formation of the Earth-moon system," the brochure notes.

Additionally, insights into the environment in which life began on Earth nearly 4 billion years ago "could be preserved in previously unexplored areas, such as the poles, the highlands and the far side of the moon," the brochure explains.

Attendees of the recent moon-exploration meeting gave Wörner's moon village vision a positive reception, according to the brochure.