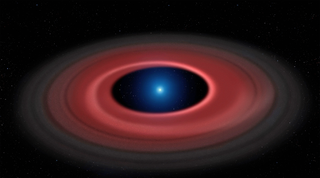 When stars about the sun's size swell into red giants and finally dwindle into white dwarfs, their planets may be kicked out of the system or consumed. New work suggests that planets that are solid all the way through and have low masses may have the best chance of surviving the surge of tugs produced by their parent stars' deaths.

Scientists refer to the difference in gravitational strength between two points, like a star and a planet, or the Earth and the moon, as a tidal force. When this tidal force shifts because of changes in one body's gravitational influence, some companions hold up okay — but others fall apart.

Astrophysicist Dimitri Veras at the University of Warwick led a team to outline a procedure for computing the tidal forces between a near-spherical solid planet and a white dwarf, the type of stellar corpse leftover by the smaller stars in the universe, like the sun. The Royal Astronomical Society recently published a statement about the new work.

Almost every known exoplanet currently orbits a star that will become a white dwarf, the study's researchers said in the paper.

To investigate the behavior of these systems during stellar transformation, the team plugged in a wide range of factors, like spin rates for planets and their shear viscosity (their resistance to flow or deformation), and found that the larger, rocky exoplanets come apart more easily than smaller worlds.

In addition, the scientists found that planets that have low viscosity, like the icy and multi-layered Saturnian moon Enceladus, may not survive as well as solid planets do.

When a main sequence star approaches death, it first swells up into a red giant star. This transformation causes "violent changes'' in the planetary system, according to the research team. ''This expansion may trigger gravitational instabilities — even without the presence of any stellar companions [such as in a binary star system] — with important consequences for destruction, escape and, in general, orbital rearrangement,'' the team stated in the study.

Exoplanets that survive a star's chaotic evolution into a white dwarf may also be important actors in the new system, because they can influence the smaller bodies around them. ''Planets which then survive to the white dwarf phase play a crucial role in frequently shepherding asteroids and their observable detritus [or waste] onto white dwarf atmospheres, even if the planets themselves lie just outside of the narrow range of detectability,'' researchers said in the study.

Earth will also play a pivotal role in the fate of a smaller body, the moon, when the sun reaches the end of its life. The sun's expansion into a red giant will warp the moon's orbit of the Earth, leading the moon to one day break apart. The moon will get too close to Earth and pass what's called the Roche limit, a point at which the moon will no longer be able to hold itself together with its own gravity, and will crumble apart into a ring of debris.

The team added that their work might facilitate future investigations about planets that are spotted around white dwarfs from ground-based facilities or through spacecraft like the Transiting Exoplanet Survey Satellite, Large Synoptic Survey Telescope and Global Astrometric Interferometer for Astrophysics.

The new work was detailed  April 9 in the journal Monthly Notices of the Royal Astronomical Society.