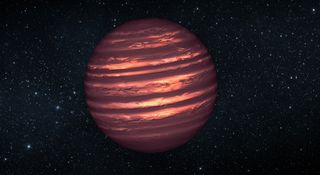 Brown dwarfs mix features of stars and planets, but they are their own unique entities. This artist's illustration shows the brown dwarf 2MASSJ22282889-431026, which NASA's Spitzer and Hubble space telescopes simultaneously observed.
(Image: © NASA/JPL-Caltech)

Paul M. Sutter is an astrophysicist at The Ohio State University, host of "Ask a Spaceman" and "Space Radio," and author of "Your Place in the Universe" (Prometheus Books, 2018). Sutter contributed this article to Space.com's Expert Voices: Op-Ed & Insights.

But instead of a cheesy brain-teaser, this is actually an entry point into exploring just how astronomers classify the exotic objects of our universe. It's also an opportunity to understand some of the weirdest citizens of the Milky Way.

The answer to the riddle, by the way, is "I'm a brown dwarf." [Brown Dwarfs: Strange Failed Stars of the Universe Explained (Infographic)]

What's in the name?

Despite the name, brown dwarfs are not very brown. These objects, with masses ranging from 12 times that of Jupiter up to half the mass of the sun, emit light on their own … just usually not very much. The largest and youngest ones are quite hot, giving off a steady glow of warm light. From a distance, those stars would look indistinguishable from their stellar cousins, the red dwarfs. The smallest and oldest ones, by contrast, are barely visible, emitting radiation firmly in the infrared part of the spectrum. You wouldn't even be able to pick them out without the help of night-vision goggles.

For the most part, though, brown dwarfs sit somewhere in the middle and glow mildly, with dim magenta hues. This makes them rather unique in the galactic cast of characters.

But decidedly unlike the stars, brown dwarfs don't glow from the heat of nuclear fires raging in their hearts. Instead, their light and heat are simply leftovers from their initial formation. The objects were birthed from collapsing clouds of gas and dust (just like the stars, only less of it), and that gravitational collapse released a tremendous amount of energy. But the energy got trapped in the infalling material, locked inside for tens of millions of years, though the heat slowly radiates away into space in the form of lukewarm light.

As this heat escapes, the brown dwarf continues to dim, sliding from fiery red to mottled magenta to invisible infrared. The greater the mass at the object's birth, the more heat it can trap and the longer it can mimic a proper star. But the ultimate fate is the same for every brown dwarf, regardless of its pedigree.

So, it might be tempting to classify brown dwarfs as just an odd variety of very large planets. After all, planets also cool steadily as they age and have no new sources of energy to keep their fires lit for billions or trillions of years.

But most brown dwarfs get to play a special game. It takes a certain threshold in mass (around 80 times that of Jupiter) to reach the frenetic temperatures and pressures in the core of an object that are needed to fuse hydrogen into helium, which is what it takes to make yourself a star. But there's a much lower threshold, around a mere 13 times the mass of Jupiter, where a different sort of fusion can take place.

In this much-cooler setup, deuterium (which is just a single proton and a single neutron glued together in a nucleus) can get smacked by a stray proton, converting the deuterium into helium-3 and releasing a tiny bit of energy. Proper stars go through a brief deuterium-burning phase as they're getting warmed up, but brown dwarfs can keep the process going longer, since they don’t ever switch over to full-blown hydrogen fusion.

However, it doesn't last forever. The biggest brown dwarfs use up all their deuterium in a few short millions of years. The reason for this is that the interiors of these creatures aren't neatly separated into distinct layers.

In stars like our sun, you have a dense peach-pit core of hydrogen and helium, surrounded by a layer of plasma dominated by radiative energies, with that layer surrounded by a churning, boiling soup. But in the smallest stars and brown dwarfs, there is no core per se, only a single tip-to-tail shell of convection, able to transport material in and out from the innermost reaches to the edge of space and back again.

So, any deuterium anywhere in a large brown dwarf will eventually find itself dragged to its doom at the center of the brown dwarf and hungrily converted into helium-3. (In an object with layers, some deuterium might lurk elsewhere without being consumed.)

As for the smaller brown dwarfs? They just quickly cool down, dropping their internal temperatures below the threshold needed to sustain the reactions. So, either way, it's quickly deuterium lights-out for these objects.

Brown dwarfs are born like stars, radiate heat for a while and sometimes even fuse elements in their centers. So, is there any reason not to put them firmly on the star side of the spectrum and call it a day?

Well, they're small. Like, really small. Embarrassingly small. You would think that something 50 times the mass of Jupiter might be, I don't know, significantly larger than Jupiter, but instead, brown dwarfs buck the trends and refuse to be much larger than a typical gas giant planet.

Stars manage to prevent themselves from shrinking down too far via the repulsive fusion parties happening in their cores. Those released energies constantly compete against the inward crush of gravity, trying to re-expand the outer layers of the star.

But, as we know, brown dwarfs don't have that advantage (at least, not long term). And unlike planets, they don't have rocky cores or icy mantles to prop themselves up. Instead, all that's left is the exotic quantum force known as degeneracy pressure, which makes it so that you can squeeze only so many particles into so small a volume. In this case, brown dwarfs are entirely supported by degeneracy pressure, so they're the minimum possible size for their mass.

The boundary between large planets and small stars isn't just fuzzy; it's an entirely new class of objects — things that simultaneously act like both planets and stars and act like neither. In other words, brown dwarfs are the tweens of the celestial realm.

Learn more by listening to the episode "What Happens When Galaxies Collide?" on the "Ask a Spaceman" podcast, available on iTunes and on the web at http://www.askaspaceman.com. Thanks to Ted W., Gisele S. and Ardent D. for the questions that led to this piece! Ask your own question on Twitter using #AskASpaceman or by following Paul @PaulMattSutter and on facebook.com/PaulMattSutter. Follow us on Twitter @Spacedotcom and on Facebook. Original article on Space.com.