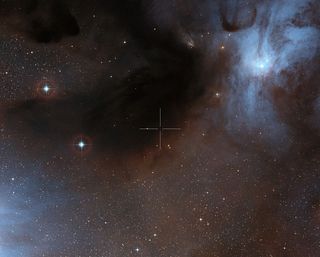 Sometimes collapsing clouds of gas and dust don't quite manage to make it as stars. These objects, known as brown dwarfs, have many of the elements of their more famous siblings but lack the mass needed to jumpstart nuclear fusion in their core. Because brown dwarfs never burn fusion at their core, scientists sometimes refer to them as "failed stars."

Brown dwarfs start out just like their main-sequence siblings. A cloud of dust and gas collapses, gravity piling the components in tightly and forming a young protostar at its center.

For main sequence stars, the gravity pushes inward until hydrogen fusion is jump-started in their core. But brown dwarfs never reach this crucial stage. Instead, before the temperatures get hot enough for hydrogen fusion to start, the close-packed material reaches a stable state and becomes a brown dwarf.

"Brown dwarfs are the missing link between gas giant planets like Jupiter and small stars like red dwarfs," Ian McLean, an astronomer at the University of California, Los Angeles, said in a statement.

Brown dwarfs come in a variety of masses and temperatures. They range from 13 to 90 times the mass of Jupiter, around a tenth the mass of the sun.

Stars are classified by their spectral type, or the energy they radiate. Brown dwarfs are similarly classified.

M stars are the coolest of the successful stars in the universe, as well as the most plentiful. Most M stars are red dwarfs, but a few are brown dwarfs. L dwarfs and T dwarfs are both identified by the elements seen in their spectrum.

Y dwarfs are the coolest of the known dwarfs. Some reach temperatures as low as a household oven, while others are as cool as the human body.

Because brown dwarfs give off so little light and energy, they can be challenging to locate. They were originally theoretical objects, unseen until the late 1980s. As astronomical instruments grew (and continue to grow) more sensitive, more brown dwarfs have been detected, though they remain a challenge. [Video: Getting WISE to Brown Dwarfs]

Brown dwarfs were originally called "black dwarfs." Now, that term is used for the final stage of the stellar evolution of a main sequence star, a white dwarf that has completely radiated away all of its heat.

Why not a planet?

Because brown dwarfs have so little mass, it can be easy to confuse them with massive planets, especially with the growing catalog of gas giants. Similarly, their lack of fusion can raise similar concerns. Like planets, brown dwarfs have atmospheres with auroras, clouds and even storms. Like stars, they can host their own planets.

One way to tell the difference is that brown dwarfs, like all stars, create their own light. Brown dwarfs glow in the red and infrared spectrum until they sufficiently cool down, emitting X-rays and infrared light that scientists can measure.

Even so, the dividing line between a cool brown dwarf and a planet can be quite thin. Some brown dwarfs are cool enough to maintain atmospheres much like gas giants. Brown dwarfs can host planets, but gas giants can have moons in orbit. So how do you definitively determine whether a free-floating object is a planet or a very cool brown dwarf? [Could Rocky Planets Form Around Brown Dwarfs? (Video)]

Ultimately, the International Astronomical Union considers any object with enough mass to fuse deuterium to be a brown dwarf, while objects with less than that — approximately 13 Jupiter masses — are considered planets.

Because they bridge the gap, brown dwarfs can provide insights about both stars and planets.

"Astronomers are always looking for colder and colder free-floating, starlike objects," astronomer Trent Dupuy, of the Harvard-Smithsonian Center for Astrophysics, told Space.com in 2013. "One key reason for this is that their atmospheres have similar temperatures to many of the gas giant planets that have been discovered orbiting stars other than the sun. So they are like little laboratories where you can study atmospheric physics relevant to extrasolar planets, but without the glare of their host star."