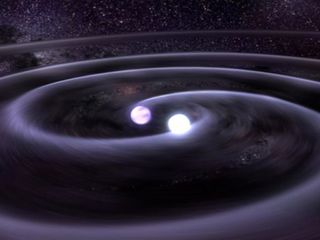 In the binary system J0806, two white dwarf stars orbit one another every 321 seconds. Scientists think the stars, about 1,600 light-years away, are spiraling in toward one another and will eventually merge.
(Image: © NASA/Tod Strohmayer (GSFC)/Dana Berry (Chandra X-Ray Observatory))

More than four-fifths of the single points of light we observe in the night sky are actually two or more stars orbiting together. The most common of the multiple star systems are binary stars, systems of only two stars together. These pairs come in an array of configurations that help scientists to classify stars, and could have impacts on the development of life. Some people even think that the sun is part of a binary system.

Binary stars are two stars orbiting a common center of mass. The brighter star is officially classified as the primary star, while the dimmer of the two is the secondary (classified as A and B respectively). In cases where the stars are of equal brightness, the designation given by the discoverer is respected.

Binary pairs can be classified based on their orbit. Wide binaries are stars that have orbits that keep them spread apart from one another. These stars evolve separately, with very little impact from their companions. They may have once contained a third star, which booted the distant companion outward while eventually having been ejected themselves.

Close binaries, on the other hand, evolve nearby, able to transfer their mass from one to the other. The primaries of some close binaries consume the material from their companion, sometimes exerting a gravitational force strong enough to pull the smaller star in completely. [Infographic: How 'Tatooine' Planets Orbit Twin Stars of Kepler-47]

The pairs can also be classified based on how they are observed, a system that has overlapping categories. Visual binaries are two stars with a wide enough separation that both can be viewed through a telescope, or even with a pair of binoculars. Five to 10 percent of visible stars are visual binaries.

Spectroscopic binaries appear close even when viewed through a telescope. Scientists must measure the wavelengths of the light the stars emit and determine their binary nature based on features of those measurements.

Eclipsing binaries are two stars whose orbits are at an angle so that, from Earth, one passes in front of the other, causing an eclipse. This feature is based on the line of sight rather than any particular feature of the pair.

Astrometric binaries are stars that seem to dance around an empty space; that is, their companions cannot be identified but only inferred. Such a companion may be too dim to be seen, or could be hidden in the glare from the primary star.

Stars referred to as double stars are two that appear close together in the sky visually, but are not necessarily anywhere near one another in space.

The first binary stars seen were visual binaries. In 1617, at the request of a fellow scientist, Galileo Galilei turned his telescope toward the second star from the end of the handle of the Big Dipper, discovering that one star seemed to be two; ultimately it turned out to be six. In 1802, Sir William Herschel, who cataloged about 700 pairs of stars, first used the term "binary" in reference to these double stars.

Stars travel around the galaxy, and sometimes a massive star captures a passing one, creating a new binary pair. But this is a rare event. More commonly, the envelope of gas and dust that collapses in on itself to form a star splits and forms two or more stars instead. These stars evolve together, though not necessarily identically.

How a pair of stars evolve depends on their distance from each other. Wide binaries have very little effect on each other, and so they often evolve much like single stars. Close binaries, however, impact each other's evolution, with mass transfers changing the composition of the stars. If one star in a close binary system explodes in a supernova or sheds its outer layers and forms a pulsar, often the companion is destroyed. If it survives, it continues to orbit the newly formed body, perhaps passing on more of its material.

Binary star systems provide the best means for scientists to determine the mass of a star. As the pair pulls on each other, astronomers can calculate the size, and from there determine characteristics such as temperature and radius. These factors help characterize single main sequence stars in the universe.

Stars in multiple systems can have a direct impact on life. A host of planets have already been found orbiting multiple stars. The orbit of these stars can affect the evolution of life, which needs a relatively stable system to develop in. Though binary and multiple systems appear initially daunting, given that one or more stars are constantly moving closer and farther from the planets and changing the amount of light, heat and radiation they receive, systems such as wide binaries or close binaries could actually produce conditions where life could eventually evolve. [9 Exoplanets That Could Host Alien Life]

In 2015, astrophysicist Paul Sutter — a research fellow with the Astronomical Observatory of Trieste — wrote on Space.com that it seems unlikely that life could exist in most binary systems.

"While binary systems certainly have a habitable zone, where liquid water could potentially exist on the surface of a planet, life might find it difficult to gain a foothold. Orbiting two stars at once, as our friend Kepler-47c does, makes life very elliptical, occasionally bringing the planet out of the zone. Life doesn't take too kindly to frequently freezing over," he wrote.

"Orbiting just one star in a binary system? Well, sometimes you'll have two stars in your sky at once, which can be a tad toasty. And sometimes you'll have a star on each face of the planet, ruining the night. And don't forget the double-doses of UV radiation and solar flares. With that kind of instability, erraticism and irradiation, it's hard to imagine complex life evolving with the kind of regularity it needs."

Is the sun a binary star?

In the 1980s, scientists suggested the presence of Nemesis, a second star — either a brown dwarf, dim red dwarf or white dwarf — in the sun's system as a reason behind the periodic mass extinctions that occurred in Earth's history, which some paleontologists suggest have occurred in 26-million-year cycles, though the cyclical nature is under debate.

In 2010, NASA's Wide-field Infrared Survey Explorer (WISE) began searching for brown dwarfs, though it isn't searching specifically for one in the solar system. But if a companion exists, WISE should turn it up. Neither WISE nor the Two Micron All Sky Survey has turned up signs of a companion, and on NASA's "Ask an Astrobiologist," David Morrison, an astrobiology senior scientist, stated that such an object would have been clearly detected by these sensitive telescopes.

In 2017, a study showed that almost every star like the sun likely had a companion when they were born. A survey using the Very Large Array in New Mexico and the James Clerk Maxwell Telescope in Hawaii examined dozens of systems and found that the younger ones generally had a wide separation, and the older ones had a narrow separation.

Modeling suggested that most stars would form with a distance between them, and then either move closer together or drift apart, breaking gravitational bonds. In the case of the sun, it's still unclear if Nemesis did exist. If it had, the sun's sibling likely moved away billions of years ago.

Some scientists suggest that there is evidence out there for a Nemesis. Evidence they cite includes the distant orbit of dwarf planet Sedna, the well-defined edge of the Kuiper Belt (a debris disk in our solar system), and the orbits of objects in the Oort Cloud (icy rocks beyond Pluto's orbit).

Separately, there are research teams pursuing the track of a purported "Planet Nine" ice giant planet that is at the edge of our solar system. In 2016, Konstantin Batygin and Mike Brown (both researchers at the California Institute of Technology) stated that Planet Nine may be altering the orbits of objects in the Kuiper Belt.