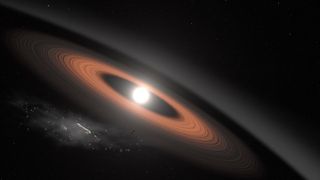 An artist's depiction of a star known as LSPM J0207+3331, which scientists believe is an old white dwarf surrounded by a dust ring.
(Image: © Scott Wiessinger/NASA Goddard Space Flight Center)

Astronomers have spotted a puzzlingly old, dusty white dwarf star, the remains of a star like our own sun, and they think the structure may change their understanding of how white dwarfs influence their environments.

The star, formally known as LSPM J0207+3331, seems to be by far the oldest known white dwarf surrounded by a dusty disk. And if the observations hold up, it will be the first white dwarf scientists know of that sports multiple dust rings within that disk, as their current theory suggests.

"This white dwarf is so old that whatever process is feeding material into its rings must operate on billion-year timescales," John Debes, a co-author on the new research and an astronomer at the Space Telescope Science Institute, said in a statement. "Most of the models scientists have created to explain rings around white dwarfs only work well up to around 100 million years, so this star is really challenging our assumptions of how planetary systems evolve."

Related: The Nuclear Battle Between the Earth and Sun

Finding white dwarfs surrounded by stuff isn't unusual, since these stars are the dense corpses of sunlike stars that have shed their gas. But typically, these former suns end up absorbing the solar system rubble that surrounds them.

And the team believes that this white dwarf is about 3 billion years old — which would be nearly three times older than the previous record holder for an ancient ringed white dwarf. That age suggests that some sort of process would need to be refilling the rings, and scientists aren't sure yet what that process could be.

The star's weirdness was discovered through a volunteer science project based out of NASA's Goddard Spaceflight Center and called Backyard Worlds, which is based on infrared data. This particular object looked strange in the infrared wavelengths, which temporarily tricked its discoverer into thinking it was a brown dwarf, a so-called failed star structure that often pops up in the Backyard Worlds data. It took a second look for the team to realize it was actually a brighter, more distant white dwarf.

And there are still more puzzles to solve about the object. The scientists behind the new research believe that because of the specific infrared signature of the white dwarf, it may actually be surrounded by two separate rings with different characteristics. That's a structure that astronomers haven't seen before around a white dwarf. They hope that once the powerful James Webb Space Telescope launches, its observations will help them solve the puzzle.

The research is described in a paper published Feb. 19 in The Astrophysical Journal Letters.