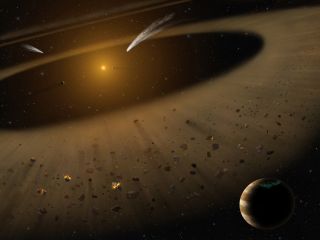 An artist's impression of the nearby Epsilon Eridani system with an asteroid belt-like debris disk scattered with rocky and icy bodies, along with the gas giant Epsilon Eridani b in the lower right.
(Image: © NASA/SOFIA/Lynette Cook )

A young planetary system located only 10.5 light-years away has a structure remarkably similar to Earth's solar system, a new study shows.

This system boasts an asteroid belt-like ring of debris, much as Earth's solar system does. As one of Earth's closest stellar neighbors, the Epsilon Eridani system is "a prime location to research how planets form around stars like our sun," said a statement from the SOFIA Science Center. [10 Exoplanets That Could Host Alien Life]

In previous observations of the Epsilon Eridani system, scientists detected an undefined debris disk consisting of leftover gas and dust, along with a huge planet that got the name Epsilon Eridani b. This gas giant orbits at the outer edge of the system, at a distance comparable to that between Jupiter and the sun, according to the statement.

The recent study, led by astronomer Kate Su of the University of Arizona, confirmed that the warm material of the debris disk surrounding Epsilon Eridani is concentrated into at least one narrow, asteroid-belt-like ring, closely resembling the structure of Earth's solar system, researchers said.

Using the Faint Object infraRed CAmera for the SOFIA Telescope instrument, or FORCAST, the researchers studied the strong infrared emissions from the warm material of the debris disk. This allowed them to further understand the structure of the Epsilon Eridani system, according to the statement.

"The high spatial resolution of SOFIA combined with the unique wavelength coverage and impressive dynamic range of the FORCAST camera allowed us to resolve the warm emission around Eps Eri, confirming the model that located the warm material near the Jovian planet's orbit," Su said in the statement.

"Furthermore, a planetary mass object is needed to stop the sheet of dust from the outer zone, similar to Neptune's role in our solar system," Su added. "It really is impressive how Eps Eri, a much younger version of our solar system, is put together like ours."

The new study was published April 25 in The Astronomical Journal.