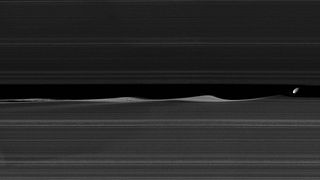 Saturn's moon Daphnis reveals some of the complex influences between the planet's rings and moons. Cassini captured several images that were combined into this mosaic of the small moon creating waves in Saturn's A ring as it orbits through the Keeler gap.
(Image: © NASA/JPL-Caltech/Space Science Institute)

Saturn's diminuitive moon Daphnis may be small, but it sure knows how to make its presence known. Case in point: this stunning photo from NASA's Cassini probe of the waves in Saturn's rings caused by the tiny moon.

Located inside a region of Saturn's rings known as the Keeler gap, Daphnis' gravitational influence sculpts waves in the A ring of Saturn's rings as the moon orbits the planet. Daphnis is just 5 miles wide (8 kilometers), but its gravity still has enough heft to disturb the particles at the edge of the A ring. [Photos: Saturn's Glorious Rings Up Close ]

Scientists use these detailed images from Cassini to learn about how the rings and moons of Saturn interact with each other, NASA officials explained in an image description. The images even reveal secrets of how the individual particles of the rings affect each other in the wake of the moon's gravity, they added.

"Three wave crests of diminishing sizes trail Daphnis here. In each subsequent crest, the shape of the wave evolves, as the ring particles within the crests collide with one another," NASA officials wrote in the image description released on Feb. 14. "Close examination of Daphnis' immediate vicinity also reveals a faint, thin strand of ring material that almost appears to have been directly ripped out of the A ring by Daphnis."

The images combined for the mosaic came from Cassini's narrow-angle camera using visible light from about 17,000 miles (28,000 kilometers) away from Daphnis about a 71 degree angle.

The Cassini project mission is a cooperation between NASA, ESA (the European Space Agency) and the Italian Space Agency. The spacecraft launched in 1997 and arrived at Saturn in 2004. Cassini will end its mission later this year in September, nearly 20 years after its launch, with an intentional dive into Saturn's atmosphere.