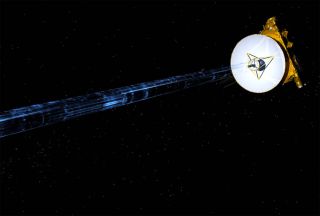 New Horizons made an epic flyby of a Kuiper Belt object to ring in the new year. But the scientists behind the spacecraft won't truly understand the data gathered during that flyby until a brand-new batch of observations reaches Earth.

Instruments on the spacecraft made those observations between Aug. 29 and Sept. 5, the mission's second observing window since the New Year's flyby of a distant solar system object called 2014 MU69, sometimes referred to as Ultima Thule. During the week of work, New Horizons instruments turned toward a set of familiar stars to gather calibration data and studied an eclectic group of outer solar system objects to address miscellaneous science questions.

"We've got lots of stuff going on — this is one of the busiest times we've had since the flyby of MU69," Hal Weaver, project scientist for New Horizons at Johns Hopkins University's Applied Physics Laboratory, told Space.com during the observation period. "There's a lot on our plate over this next week, but so far, all indications are that things are working properly and the spacecraft is very busy right now."

These days, New Horizons spends most of its time spinning across the vast reaches of the Kuiper Belt, the ring of solar system debris in which Pluto orbits. As New Horizons spins, it sends a steady drip of data Earthward at a rate of just 2 kilobits per second, Weaver said. During that time, the probe's instruments can't take images.

In the wake of a flyby, the scientists behind the mission want the spacecraft to focus on returning data, since that will take a total of 20 months from the MU69 flyby as it is. But even if every scrap of New Horizons' MU69 data were on Earth right now, scientists wouldn't be able to truly learn about the object without last week's observations.

That's why gathering this data is worth pausing the spacecraft's delivery of reports and why some of the new observations will take precedence over the eagerly awaited MU69 data. "We need [to have] those to finish the analysis of the MU69, so this data does play into that," Alice Bowman, the New Horizons Mission operations manager at Johns Hopkins University's Applied Physics Laboratory, told Space.com.

For Bowman, however, who is responsible for the health of the entire spacecraft, it's a tense time, since New Horizons is mostly silent while making observations. "It's a little nerve-wracking for me to go days without seeing the spacecraft, because I always want to know what it's doing," Bowman said. "We're pretty sure everything's going to be fine, but I just like to see it."

Bowman's anxiety aside, last week's observations could help mission staff identify any problems with individual instruments on the spacecraft. That's because instruments turned to check in on old friends, objects that they have observed many times over the course of the mission and that scientists know are fairly staid in appearance. The device Weaver primarily works with, for example, the long-distance camera LORRI, popped over to look at NGC 3532, a star cluster the camera has photographed annually since 2013.

The team behind the mission doesn't expect to see anything particularly exciting in the calibration data, Weaver said. But that's the entire point. New Horizons has hurtled through space for more than 13 years, and a glitch could occur at any time; calibration observations are designed to alert scientists if one does. "This is basically a checkup for the entire observatory," Weaver said. "Is everything still working properly? It'll help us interpret the data we get from MU69."

This period of observations also offered scientists the chance to test out a few new tricks. Weaver said he's particularly excited about new spacecraft commands that should double the exposure time for the probe's images. That feat requires firing the spacecraft's thrusters about 80 times a minute in order to steadily photograph the same object for more than a minute.

"We're always trying to think in new ways to improve the spacecraft's capabilities as we plunge deeper into the Kuiper Belt," Weaver said. The team is testing the longer exposure by taking images of Quaoar, a dwarf planet. Researchers will know the technique is a success if the photos they receive are crisp, without Quaoar looking smeared across the frame.

But don't get your hopes up for the next stunning astrophotograph. The New Horizons observations of Quaoar are special because of the probe's location in the heart of the Kuiper Belt. That's also true for the new data the spacecraft has gathered about the planets Uranus and Neptune, Neptune's moon Triton, and a few other Kuiper Belt objects.

New Horizons' position means its instruments see these objects from a different perspective than many of the observations scientists have for these worlds. The myriad telescopes on and around Earth all see very distant objects essentially fully lit by the sun. That's because, on the scale of the solar system, Earth and the sun are much closer to each other than planets 20 or 30 times farther away, not to mention Kuiper Belt objects that are 40 times farther away.

New Horizons' long journey has given the probe a much different angle on these distant worlds, which means the probe can gather otherwise-impossible measurements. In particular, this class of observations can help scientists study the atmospheres on these worlds, investigating whether they are swaddled in haze particles.

"It's not going to look like much … [the objects] look like pinpoints of light," Weaver said. "It's not as exciting as flying right next to them, but still, we're in a unique geometry in space and we want to take advantage of that."

The New Horizons probe could be flying right next to something else during its stint in the Kuiper Belt: dust particles created by eons of rocky collisions in this rubble zone. Last week's data include some attempts to detect this dust, although, according to scientists' current understanding of the Kuiper Belt, New Horizons won't be able to see any dust.

"This is a long-shot observation," Weaver said. "If we detected something, that would really be something. It would tell us that there's a lot more grinding up of material in the Kuiper Belt, maybe a lot more objects out there than what we originally thought. But if the Kuiper Belt is behaving according to our current ideas, then we probably won't see anything. But we thought it was worth trying."

Last week's observations are the second batch to be gathered since the 2014 MU69 flyby, after a three-week stint in March. Longer observation periods are particularly helpful for the spacecraft as it studies the Kuiper Belt objects all around it. For many of these bodies, scientists aren't sure of the precise orbits.

"The objects out there are very, very dim, [and] the spacecraft's headed toward the galactic center, so it's very bright," Bowman said. "One way of increasing your chances of seeing a very dim, small object is to increase your exposure and also take a lot of images and stack them upon each other." So the spacecraft gathers some images, waits a bit, then gathers more.

In March, those observations focused on a Kuiper Belt object called 2014 PN70 — the runner-up for New Horizons' second major flyby, which ended up focusing on 2014 MU69 instead after scientists concluded it was a more promising target.

The spacecraft's next stint of work will stretch even longer, for nearly three months beginning in early April. Those observations will focus on an object called 2011 JX31, Bowman said. However, because scientists have been identifying Kuiper Belt objects for less than three decades, researchers could still spot new targets for the spacecraft.

"There's always a possibility that new [Kuiper Belt] objects will be discovered that would be within the range of our camera, just like this time," Bowman said. For its September observations, New Horizons added two such objects so recently discovered that they don't have formal names yet.

The humans running New Horizons hope to squeeze in one additional dramatically close flyby before the mission ends. "Our scientists are trying to figure out the probability of whether or not we're going to have something that is within the range of the propellant we have left in the tank," Bowman said.

But none of these sundry space rocks — last spring's, last week's or next spring's targets — will ever catch the full force of New Horizons investigations. They simply aren't in the right place at the right time.

"Unfortunately! I would like to tell you yes," Bowman said. "We're still waiting.