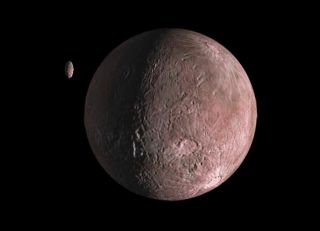 Quaoar is a planetoid that lies beyond Pluto's orbit in the solar system. Its discovery in 2002, as well as subsequent discoveries of other small worlds, led to a new classification and the redefinition of Pluto as a "dwarf planet." Quaoar is probably massive enough to be considered a dwarf planet, but it has not been classified as such yet.

Quaoar lurks in the Kuiper Belt, a group of icy objects beyond Neptune. It is about 42 astronomical units, or Earth-sun distances, away. That's about 4 billion miles (6 billion km) — a billion kilometers more distant than Neptune. It takes about 288 years for Quaoar to go once around the sun in a roughly circular orbit.

Mike Brown and Chadwick Trujillo of the California Institute of Technology found Quaoar using a 48-inch telescope at the Palomar Observatory in California. It showed up as an 18.5-magnitude object moving against the background stars in the constellation Ophiuchus. They suggested the name Quaoar [pronounced kwa-o-ar] after a creation god of the Native American Tongva tribe — the original inhabitants of the Los Angeles basin where Caltech is located. According to legend, Quaoar "came down from heaven; and, after reducing chaos to order, laid out the world on the back of seven giants. He then created the lower animals, and then mankind."

Around the time of its discovery, the Hubble Space Telescope measured the object and found that its diameter was about 800 miles (1,300 kilometers) making it larger than the asteroid Ceres but smaller than Pluto. (Subsequent measurements have found it was slightly less than that, at about 1,092 km or 679 miles.)

"Quaoar is greater in volume than all known asteroids combined. Researchers suspect it's made mostly of low-density ices mixed with rock, not unlike the makeup of a comet. If so, Quaoar's mass is probably only one-third that of the asteroid belt," NASA wrote at the time.

In 2007, Brown announced that Quaoar had a tiny moon. Named for the sky god Weywot, son of Quaoar, the moon is estimated to have only one two-thousandth the mass of its parent. Weywot is likely the result of a collision with Quaoar and another object, Brown wrote.

Quaoar is believed to be red and also coated in water ice, and that in the distant past it had an atmosphere with carbon monoxide, nitrogen and methane.

Some of these molecules bled away into space since the object's gravity was so small, but methane stayed put. Radiation from the sun then gradually formed hydrocarbon chains out of the carbon and hydrogen atoms that make up methane. This process made the planet appear red in telescopes.

One research team in 2004 published research suggesting that Quaoar had or has volcanic activity because of the ammonia hydrate and water ice found on its surface. Radiation should have destroyed these particles in a few million years, which is a fraction of time compared to the solar system's age.

"We conclude that Quaoar has been recently resurfaced, either by impact exposure of previously buried ices or by cryovolcanic outgassing, or by a combination of these processes," the scientists wrote in their paper, which was published in Nature. More research will be needed to confirm this, they added. The study was led by David Jewitt of the University of Hawaii's Institute for Astronomy.

Brown also led the teams that discovered several other dwarf worlds in the 2000s, such as Haumea, Eris and Sedna. These small worlds made astronomers realize that bigger objects lurked beyond Pluto than previously believed. In 2006, the International Astronomical Union met to determine how to define a planet, since some were wondering what to call these large new objects.

The IAU determined that for an object to be a "planet," it must be big enough to be round, it must orbit the sun without orbiting another body and it must clear debris around its orbit. "Dwarf planet" meant that the object was round and orbited the sun, but it was too small to clear debris.

"Modern science provides much more information than the simple fact that objects orbiting the sun appear to move with respect to the background of fixed stars," the IAU wrote in its justification for the change.

"For example, recent new discoveries have been made of objects in the outer regions of our Solar System that have sizes comparable with and larger than Pluto. Historically Pluto has been recognized as the ninth planet. Thus these discoveries have rightfully called into question whether or not the newly found Trans-Neptunian Objects should also be considered as new planets." [Related: New Horizons' Pluto Flyby: Latest News, Images and Video]

There's debate about whether Quaoar is actually round. It's hard to spot because it's far out in the solar system and it's small, making it difficult to estimate its size. Brown says the planet would qualify as theoretically speaking, it has the mass required to be round. The IAU, however, only lists a few dwarf planets at this time: Ceres, Pluto, Eris, Makemake and Haumea.