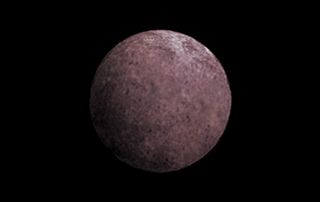 An artist's conception of 2007 OR10, nicknamed Snow White. Astronomers suspect that its rosy color is due to the presence of irradiated methane.
(Image: © NASA)

A mysterious little world nicknamed "Snow White" is covered in ice and may sport the wispy remnants of an atmosphere, a new study of a dwarf planet that lies outside Neptune has found.

Even though Snow White — officially known as 2007 OR10, and orbiting the sun as part of the Kuiper belt — is actually red, half of the surface is covered by water ice that probably spewed from ancient cryovolcanoes, researchers said.

The dwarf planet's reddish hue likely comes from a thin layer of methane, the last gasps of an atmosphere that has been bleeding off into space for eons.

"You get to see this nice picture of what once was an active little world with water volcanoes and an atmosphere, and it's now just frozen, dead, with an atmosphere that's slowly slipping away," the study's lead author Mike Brown, of Caltech, said in a statement. [Looking Back on Killing Pluto: Q & A With Mike Brown]

Snow White is about half the size of Pluto. Like Pluto, it's part of the Kuiper belt, which is the ring of icy bodies that orbit the sun beyond Neptune.

At the time of its discovery in 2007, Brown guessed that Snow White had broken off long ago from another dwarf planet, called Haumea. Haumea, a weird, football-shaped body, is sheathed in water ice, so Brown figured this dwarf planet was, too — hence the nickname Snow White.

However, follow-up observations soon showed that Snow White, like many other Kuiper Belt objects, is actually quite red. So Brown and his team weren't expecting to find a lot of water ice when they used the 6.5-meter Magellan Baade Telescope in Chile to take a closer look at Snow White last year.

Brown and his colleagues reported their results last month in the Astrophysical Journal Letters.

Scientists know of one other dwarf planet that's both red and covered with water ice: Quaoar, which Brown and his team discovered in 2002. [Meet the Solar System's Dwarf Planets]

Researchers think Quaoar, which is slightly smaller than Snow White, once had an atmosphere composed of volatile compounds such as methane, carbon monoxide and nitrogen. But its gravity wasn't strong enough to hold onto these chemicals, and the icy world began losing its atmosphere to space.

Over time, everything but some methane escaped. And radiation from space has transformed those methane molecules — which consist of one carbon atom bonded to four hydrogen atoms — into long hydrocarbon chains, researchers said.

Those chains look red to our instruments, and they sit atop Quaoar's water-ice surface.

"That combination — red and water — says to me 'methane,'" Brown said. "We're basically looking at the last gasp of Snow White. For four and a half billion years, Snow White has been sitting out there, slowly losing its atmosphere, and now there's just a little bit left."

While Snow White definitely has a lot of water ice on its surface, the evidence for methane is not conclusive, Brown added. Researchers hope to use even bigger telescopes to scrutinize the dwarf planet further.