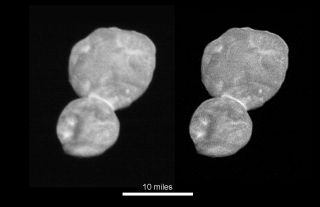 The surface features of Kuiper Belt object Ultima Thule (2014 MU69) are coming into focus in these images taken by NASA's New Horizons spacecraft during its historic flyby on Jan. 1, 2019. These images, released Jan. 2, were taken a day earlier from a distance of 18,000 miles (28,000 kilometers) with a scale of 730 feet (140 meters) per pixels.
(Image: © NASA/Johns Hopkins University Applied Physics Laboratory/Southwest Research Institute)

Names matter, even when they're temporary nicknames for objects 4.1 billion miles (6.6 billion kilometers) away from Earth.

Those concerns were apparently prompted by an article I wrote for Newsweek in March, immediately after the nickname was announced, after searching for the term in Google Scholar and discovering references to the Nazi party on the first page of results. At the time, and again today, New Horizons personnel defended the choice, citing its original connotations.

"I sort of thought we might get that question," mission principal investigator Alan Stern of the Southwest Research Institute said after a reporter asked about the name's criticisms during a news conference held today to present the first high-resolution images and preliminary science results from the flyby. [New Horizons' Historic Flyby of Ultima Thule: Full Coverage]

"I've said it a number of times, I think New Horizons is an example — one of the best examples in our time — of raw exploration, and the term Ultima Thule, which is very old, many centuries old, possibly over a thousand years old, is a wonderful meme for exploration," Stern said. "That's why we chose it. I would say that just because some bad guys once liked that term, we're not going to let them hijack it." The statement was greeted by applause from news conference attendees.

During his science presentation, Stern also referred to the two lobes of the space rock as "Ultima" (the larger lobe) and "Thule" (the smaller one).

In its original use, the term Ultima Thule is ancient, first used during the Roman Empire and also popular during the medieval period, referencing lands that are both very distant and very cold — which the Kuiper Belt object of course is. But centuries later, Nazis appropriated the term to apply to a mythological Aryan homeland, incorporating it into their racist and anti-Semitic worldview.

In March, NASA and the New Horizons team announced their decision to use Ultima Thule as a nickname for the second stop on their solar system tour, which is officially known as 2014 MU69, a formula that designates when it was discovered.

(The nickname was never meant to be permanent nomenclature, which will need to be approved by the International Astronomical Union, the group that governs names in outer space. The New Horizons team wanted to wait until this year, after the flyby, to submit a formal naming petition in part so it could reflect how many objects actually make up 2014 MU69.)

"Ultima Thule" was one of 37 contenders that the New Horizons team selected from 34,000 public suggestions and put to the vote. Other options people could vote for included Año Nuevo, Denali, Lewis & Clark, Peanut/Almond/Cashew and Terra Nova. At the end of that process, it ranked 7th, but the team chose it over the more popular options.

"I had never heard the term Ultima Thule before we had our naming campaign," Mark Showalter, a planetary astronomer at the SETI Institute and investigator on the New Horizons mission who led the naming process, told me at Newsweek in March. "'Beyond the limits of the known world' — that's such a beautiful metaphor for what we're doing this year." (Stern also responded to my interview request but was preparing to board an airplane.)

When asked about the Nazis' use of the term, Showalter confirmed that he was aware of the usage and said that the New Horizons team and NASA, including its legal department, decided that the original meaning was more prominent and outweighed the less savory connotations. (One scholar I spoke with in March who has researched the term Ultima Thule in another context agreed that the Nazi connotation is not as well-known as other uses of the words.)

In March, Showalter seemed to emphasize frustration at the object's formal name as much as enthusiasm for the specific nickname the team settled on. "We're very, very tired of talking about 2014 MU69," Showalter said in March. "Any name is better than 2014 MU69."