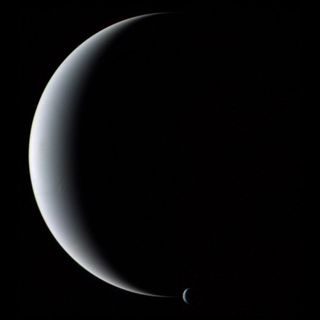 The crescent planet Neptune and its crescent moon Triton, as seen by NASA's Voyager 2 spacecraft in 1989.
(Image: © Voyager 2, NASA)

Triton is the largest of Neptune's moons. Discovered in 1846 by British astronomer William Lassell — just weeks after Neptune itself was found — the moon showed some strange characteristics as astronomers learned more about it.

To NASA's knowledge, Triton is the only moon in the solar system that orbits in a direction opposite to the rotation of its planet. Additionally, its surface is a study of contrasts, with smooth plains appearing to be right next to cratered surfaces.

No spacecraft has gone to Neptune since the 1980s, but telescopes are capturing new data on Triton from the ground. A notable recent find was discovering seasons on the moon, using the European Southern Observatory's Very Large Telescope in Chile.

Renewed interest in Triton began shortly after the New Horizons mission flew past Pluto in 2015. NASA released the best high-resolution map of Triton to date in 2014 in anticipation of the flyby, because it is believed that Triton and Pluto could share a similar history. They are of similar size, have nitrogen in their atmospheres and also icy surfaces.

Triton was found on Oct. 10, 1846, just 17 days after French astronomer Alexis Bouvard discovered Neptune. According to NASA, Triton was known simply as "the satellite of Neptune" until 1949, when a second moon (Nereid) was found. All of Neptune's moons, according to International Astronomical Union guidelines, are named after Roman or Greek mythological characters associated with Neptune, Poseidon or oceans.

Astronomers had to wait well over a century to see Triton as more than a dot, however. In 1977, NASA sent two Voyager probes on a one-way trip through the outer solar system, taking advantage of a rare planetary alignment that allowed them to move from one location to the next without using a lot of fuel. Voyager 2 flew by Neptune and its system on Aug. 25, 1989.

Among the spacecraft's most stunning finds: icy volcanism is likely taking place on Triton's surface. Voyager 2 took pictures of "several geyser-like volcanic vents that were apparently spewing nitrogen gas laced with extremely fine, dark particles," according to NASA. The agency estimates the particles go as high as 5 miles (8 kilometers) before flowing downwind and striking the surface.

It also appears that a large portion of the surface has melted. NASA said the melting was probably due to tidal heating that began when Neptune captured Triton, which could have left the satellite liquid for at least 1 billion years.

Although no spacecraft will go by Neptune's system in the near future, computer models and higher-resolution telescopes on Earth are providing new information about Triton's history and environment. (NASA has also released new pictures of Triton from Voyager 2 at least as late as 2009.)

In 2010, long-range infrared observations with the European Southern Observatory's Very Large Telescope revealed that the thin atmosphere of Triton changes with the seasons. At the time the VLT looked at the planet, it was summer in the southern hemisphere, where the sun's warmth thickened the atmosphere.

New models of Neptune could also provide insights on Triton, such as one released in 2015 that looks at the gas giant's magnetosphere. The magnetic field appears to be particularly pronounced on one side, according to Voyager 2 data and the model, and scientists next want to figure out how this field could interact with Triton.

Other information about Triton's history could come from studying small bodies in the solar system, such as Comet 67P/Churyumov–Gerasimenko. The Rosetta spacecraft gathered data that showed molecular nitrogen on the comet's surface in 2015. From that information, scientists are trying to figure out where the nitrogen came from and how it compares to other bodies with nitrogen in the solar system, such as Triton and Pluto.

Astrobiologists are also considering that Triton could have water under its icy surface. "I think it is extremely likely that a subsurface ammonia-rich ocean exists in Triton," said the University of Maryland's Saswata Hier-Majumder in a 2012 Astrobiology Magazine article republished on Space.com. "[But] there are a number of uncertainties in our knowledge of Triton's interior and past, which makes it difficult to predict with absolute certainty."

One example: because no one is quite sure of the size of Triton's rocky core, that creates difficulty with calculating the amount of heating produced by the decay of radioactive isotopes, also known as radiogenic heating. More heating would increase the size of the ocean.

In 2006, a model published in Nature suggested Triton was originally a member of a binary system that orbited the sun. During a close encounter with the planet, Neptune pulled Triton away from its companion. Researchers in 2017 also postulated that Triton was likely a double-object system, similar to dwarf planet Pluto and its large moon, Charon. In the Astronomical Journal, the authors also noted that when Neptune's gravity captured Triton, the secondary body escaped. Triton survived only because Neptune's system was bereft of a large moon. If there had been a moon moving in a normal (forward) orbit around Neptune, its gravitational influence meant Triton instead would have fallen into Neptune.

The authors also said their research showed that Triton played an important role in the formation of Neptune's system. Some models suggest that Neptune used to have other moons orbiting it. Then, when Triton was captured long ago, some of these moons were propelled into the planet and others were thrown out of orbit.

There are some other indications of chaos in Neptune's system, including the outlying moon Nereid. The moon has an extremely stretched-out orbit around Neptune and takes 360 Earth-days to make a single orbit. In addition, some of these smaller moons around Neptune may have been absorbed into Triton itself. "If we want to look for the primordial Neptunian satellites, my best guess would be to look inside Triton," lead author Raluca Rufu, a doctoral student at the Weizmann Institute of Science in Israel, told Space.com by email in December 2017.