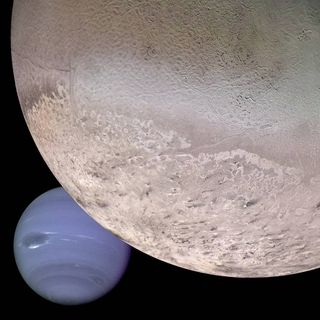 A computer-generated montage shows Neptune from the perspective of a spacecraft approaching Triton, the planet's largest moon.
(Image: © NASA)

Neptune's original family of satellites may have been destroyed when its largest moon, Triton, entered the picture. New research suggests that the massive moon may have tossed some of the original satellites into the ice giant, kicked others out of orbit and swallowed up the rest, creating a new family that doesn't look much like those surrounding the other giant planets.

For years, scientists have suspected that Triton wasn't part of Neptune's original collection of moons. The massive moon has a backward orbit, and makes up over 99 percent of all the mass orbiting the planet. Instead, they thought it was a captured object whose orbit was circularized by debris disks created by impacts.

"We find that the mutual impacts between satellites are not disruptive enough to create the desired debris disk," Raluca Rufu, a doctoral student at the Weizmann Institute of Science in Israel, told Space.com by email. Working with co-author Robin Canup, a researcher and associate vice president at the Southwest Research Institute in Colorado who models solar system evolution and collisions, Rufu is lead author on new research that suggests Triton likely sent Neptune's original satellites flying.

The moons of Jupiter, Saturn and Uranus are all well-behaved compared with those of Neptune. The other three gas giants have a wealth of satellites — Jupiter has 70 to Neptune's 14, for instance — traveling in nearly circular paths around their equators. While Triton's path is circular, it travels backward compared with Neptune's rotation, and spins backward, besides.

And Triton is not the only outlier at Neptune. Nereid, one of the planet's outermost moons and the third largest, has one of the most stretched out, or eccentric, orbits of any moon in our solar system. It takes 360 Earth-days for the tiny moon to make one loop around its planet.

The unusual combination of moons led scientists to suggest that Triton was part of a pair of objects from the edge of the solar system that burst into the Neptunian system.

"The leading theory of Triton's capture is that Triton was part of a binary system, similar to Pluto and Charon," Rufu said. "Triton was captured while the secondary body escaped Neptune's gravitational pull."

Rufu and Canup modeled a Neptunian family similar to the other gas giants, then had Triton crash the party. Over time, the extended orbit of a captured satellite should settle into the more circular orbit seen today, through interactions with other moons and small objects.

Previous studies had shown that Triton's irregular orbit needed to settle down within a hundred thousand years, or irregular satellites like Nereid would have been tossed out, the researchers said. Rufu and Canup found it wasn't enough for Triton to just collide with the small satellites after it was captured—it had to throw some of the moons out, as well.

Instead of modeling an interloper that settled in smoothly with its new family, they crashed Triton into other, smaller satellites, sending many of them flying. The energy from the impacts knocked the rough edges off Triton's orbit, allowing it to succumb to Neptune's gravitational tugs and become more circular.

While some of the original satellites were hurled into space or swallowed up by Neptune, others may have been absorbed by Triton itself.

"If we want to look for the primordial Neptunian satellites, my best guess would be to look inside Triton," Rufu said. She warned that the energetic impacts could melt the satellites, removing any observable craters and making the primordial pieces more challenging to identify.

It's too bad for Neptune's original satellites that the ice giant didn't start out with more moons. Rufu and Canup found that a more massive primordial family could have meant doom for Triton. As long as the mass of the original satellite system was comparable to Uranus, which has only 27 moons, Triton would dominate, wreaking havoc as a homewrecker. But if the original system had contained a more massive moon, Triton may not have stood a chance. According to Rufu, a collision with a large enough satellite in a prograde orbit, along the same path as the planet's rotation, would have thrown Triton into Neptune.

"A massive prograde moon [could] decrease Triton's speed too much, and lead to Triton's fall," Rufu said.

The research was detailed Nov. 6 in The Astronomical Journal.