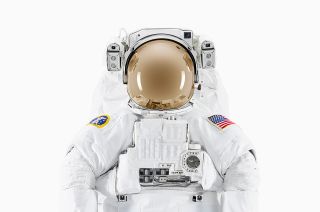 A new book captures humanity's connection to space exploration through the iconic artifacts it has and continues to create.

"NASA: Past and Present Dreams of the Future," by commercial photographer Benedict Redgrove, offers more than 200 images of the U.S. space agency's most recognizable objects in a way that they have never been seen before. Captured in high resolution and then digitally isolated from their backgrounds, the spacecraft, spacesuits and other hardware are shown without the distraction of their settings.

"I wanted to explore the reaction we have to these machines and objects when we see them in fine detail," said Redgrove in a statement. "These objects have come to signify human achievements."

Nine years in the making, "NASA: Past and Present Dreams of the Future" is the product of and a testament to the access Redgrove obtained to space facilities around the country. Redgrove took five years to negotiate and build up a working relationship with NASA before spending the next four years photographing and producing the book.

"I have been to various NASA sites and shot tests and specimens and displayed objects through the help of so many NASA officials, from mission controllers [to] technicians and engineers [and] project leaders," said Redgrove.

"The image of the astronaut, or spaceman has been with me ever since, as a sort of talisman to all that is great and good," said Redgrove. "They symbolize the explorer, the hero, the good character, the leader. The spacesuit takes on that character, the suit and the human become one entity, more powerful than either on their own."

"It's now a symbol in it's own right," he said, "and it's become greater than the sum of its parts. It has reached an iconic stature that few objects can match."

To publish "NASA: Past and Present Dreams of the Future," Redgrove turned to a crowdfunding campaign on Kickstarter.

"I wanted the project to conclude in a way that felt honest to me. Involving another party that might want to do things their way didn't feel correct, but Kickstarter really does offer that chance," Redgrove explained. "It connects me with you, the people who are not just buying a book, but more importantly backing and supporting the project."

Through Kickstarter, Redgrove is offering copies of the book for $150 (£120). The first 100 people to pledge will receive a signed copy along with their name printed inside. There are also opportunities to receive signed photo prints and gallery-size pieces of artwork.

Redgrove is targeting November for delivery of the book, assuming the campaign reaches its $195,835 goal by Aug. 19. As of Thursday (July 25), the project had reached 50 percent of its funding from more than 460 supporters.

The Kickstarter campaign was launched on July 20, 50 years after the first moon landing and two months after Redgrove's 50th birthday.

"I was born in May 1969, so I share my years with the Apollo lunar landings. Maybe this is why I have been so interested in all things space and space travel all of my life," said Redgrove. "My dreams of going into space are now relegated to acceptance of staying on this beautiful planet of ours, but the objects still hold a magical and transformative power for me."

It is this energy that I wish to convey. The excitement and wonder of all of these objects is something I hope to transfer," he said.

Click through to collectSPACE to see more photos from Benedict Redgrove's "NASA: Past and Present Dreams of the Future."