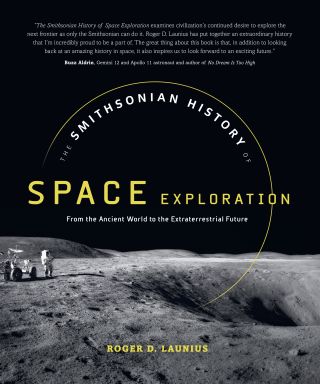 Space exploration is constantly fueled by mankind's desire to reach further and learn more about the cosmos.

A new book, "The Smithsonian History of Space Exploration: From the Ancient World to the Extraterrestrial Future" (Smithsonian Books, 2018), released Oct. 23, follows humankind's journey to spaceflight.

From looking up at the stars with sheer wonderment to sending astronauts to the moon and launching satellites to the far reaches of the galaxy, author Roger D. Launius, a spaceflight historian, illustrates the cutting-edge advancements made in astronomy and space science. [NASA: 60 Years of Space Exploration]

Space.com spoke with Launius about key moments in the history of space exploration and where we're headed as we aim to send humans to Mars and beyond.

Space.com: In your experience as a spaceflight historian, what are some of the most iconic moments in human history that helped lay the foundation for space exploration?

Roger D. Launius: The discovery of reaction-type vehicles, or rockets, which dates back to 12th century China, was a major technical breakthrough. At that point, they were thinking about weapons, not about going into space — no one had a real concept of space yet. Now, rockets have become the vehicle we use to get to space.

Also, the realization that points of light in the sky at night are not just points of light — some of them are planets. As soon as humans came to grips with that, we started to speculate about the possibility of going there. Then, in the 20th century, we saw the merger of scientific and technological understanding, along with the development of capabilities that enabled us to go to space.

Space.com: How has the idea of space changed from the Babylonian astronomers of 700 B.C.?

Space.com: From religious influence to using rocketry as weapons and relying on the stars for navigation, what are some of the different roles astronomy has played in shaping human history?

Launius: Astronomy is the oldest of all the sciences. It dates back to the first recording of human history. From observations, people learned when to plant crops and [gained] an understanding of the changing seasons. When you recognize that, you start to find explanation — that the Earth revolves around [the sun]. As a result, calendars were developed, as well as the ability to tell time.

Space.com: You mention in the book that when early explorers traveled to new territories they would describe the unfamiliar creatures they encountered as "alien." Now, as we hunt for other worlds in the universe, do you think we will find any sort of extraterrestrial life?

Launius: I certainly hope so! That's the ultimate question — are we alone in the universe? Space science is built around trying to answer that question. I think in the 21st century we will probably find the answer.

Ultimately, it will be about detecting some form of life — probably microbial. The biomass of this planet suggests that 99.9 percent of all the creatures that are alive are microbial, most of which are underground or underwater. With that as the case, one would expect that that's the life you'd most readily encounter someplace else in our solar system or beyond. Consequently, it would not be life that we would be able to communicate with. Chances are it would be something that's not good for us, and we would probably not be good for it because it would have evolved in a different way, in a different place, under a different set of circumstances. [Best Spaceflight and Space History Books]

Space.com: How did we get to the stage of space exploration we're at now?

Launius: From theoretical work that was done in the late 19th century by people like ["Russian rocket pioneer"] Konstantin Tsiolkovsky … to experimenters like Robert Goddard [who invented the world's first liquid-fueled rocket], we now have the consistent and persistent development of rocket technology that enables us to get off this planet, which is the only way we can undertake space exploration.

That process of development — a lot of it fueled by military research, done for the purpose of killing people and breaking things, as opposed to space exploration — is significant. In the 20th century, we were able to harness that technology for [other] purposes. Space exploration is built upon that concept.

Space.com: Where are we going with the space program?

Launius: I think we'll [launch] more satellites to the edges of the solar system in the 21st century. I also think humans could set foot on the moon again and even move outward to Mars.

Space.com: What, if any, challenges do you think we face as we move forward with international space exploration?

Launius: It's always hard to work with multiple nations. We have to negotiate and decide what is mutually agreeable. It's complicated by different cultures, languages and priorities — but I think that if we were to look back in one hundred years, we would see the International Space Station as one our greatest achievements — at least thus far. And it's not memorable for the science conducted on board, but for the ability to get multiple nations to work together for scientific and technological pursuit, rather than building weapons of war.

Space.com: Are there any major takeaways about the history of space exploration that you hope to leave readers with?

Launius: Space science is a whole lot harder than anyone ever thought. However, over time, we've learned that almost anything we envision, we can accomplish.

This interview was edited for length. You can buy "The Smithsonian History of Space Exploration" at Amazon.com.