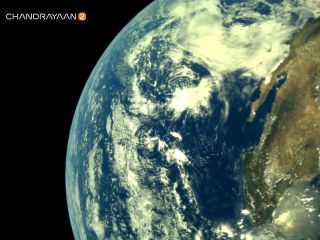 An image of the Pacific Ocean and Baja California captured by India's Chandrayaan-2 mission on Aug. 3, 2019.
(Image: © ISRO)

An Indian spacecraft is taking the scenic route to the moon and has the photos to prove it.

Chandrayaan-2 launched on July 22 and will arrive at the moon in early September. That long journey let India loft the spacecraft on a smaller rocket, but it also means the mission will spend weeks orbiting Earth — and snapping some photographs to send home.

The Indian Space Research Organisation (ISRO), which built and operates Chandrayaan-2, shared photographs snapped by the spacecraft on Aug. 3, about two weeks after the mission's launch. The images show snippets of Central and North America, as well as the Pacific Ocean and the Gulf of Mexico.

The spacecraft will continue orbiting Earth until mid-August, when it will turn its sights on the moon. The mission includes an orbiter, a lander and a rover, with all three scheduled to reach their destinations in early September.

If the lander touches down successfully, India will become the fourth nation to successfully execute a soft landing on the moon, after the Soviet Union, the United States and China. An Israeli lander attempted the feat earlier this year but crashed into the lunar surface.

Chandrayaan-2 is slated to touch down much closer to the south pole of the moon than any previous mission has managed. That region is particularly intriguing to scientists, who want to study the water ice frozen away in permanently shadowed craters near the pole.

The mission's predecessor, the Chandrayaan-1 orbiter, gathered the data that proved such water ice existed. But instruments on the surface will give scientists a much closer look — for about two weeks in Earth time. After that, the harsh cold of the lunar night will put an end to all but the orbiter, which will continue circling the moon for about a year.