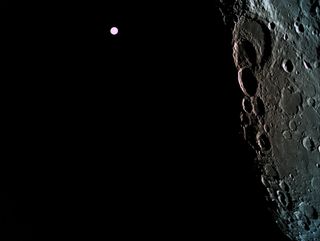 A view of the far side of the moon, with Earth in the background, captured by the Beresheet lander during its lunar orbital insertion on April 4, 2019.
(Image: © SpaceIL/Eliran Avital)

Israel's Beresheet lander finally concluded a long, spiraling journey out of Earth's orbit and into the moon's, and the SpaceIL team celebrated by releasing stunning photographs the spacecraft captured of the far side of the moon.

The spacecraft successfully entered lunar orbit yesterday (April 4) in preparation for landing on April 11. The occasion makes Israel the seventh nation to build a spacecraft that has successfully orbited the moon.

SpaceIL didn't provide many details about the photographs themselves, but did note that the image of the lunar surface was taken from about 292 miles (470 kilometers) above the moon.

The successful orbital insertion after a 6-minute engine burn marks the end of a six-week series of ever-expanding loops around Earth, a path designed to accommodate Beresheet's piggyback launch with another satellite.

From here, the spacecraft will spend another week orbiting the moon before touching down on its surface. If all goes smoothly, April 11 will see it touch down softly near Mare Serenitatis. Once it lands, Beresheet will work for just two or three Earth days, since its science goals are quite limited.

The spacecraft's landing site is on the near side of the moon, but these first two images released by the SpaceIL team star the far side of the moon. However, landing there is a much more complicated endeavor, since it requires a communications relay satellite to ensure the lander can still send data back to Earth.

That's the approach being taken by China during its ongoing Chang'e 4 mission, which landed Jan. 2. And the pair of lunar robots may have still more company, as India seeks to launch its own moon lander mission, Chandrayaan-2, later this year.